Each asset in the game has at least two nodes on its Node Map:

By default, the attributes of these nodes are displayed in the respective Options panel of the asset.

If you wish to make an asset in the game behave in a certain way in response to the player’s actions, for example, jump when touched or explode when it collides with an obstacle, you need to add the appropriate nodes to the Node Map of the asset.

You can now easily add the desired movements and other behaviors to an asset by using the Add Brain Box button at the bottom of the Options panel of the asset. This automatically adds a predefined group of nodes to the asset based on your box selection.

Similarly, if you want to modify the game flow logic, for example, by randomizing transitions to new levels or by locking certain levels until the user unlocks them, you need to use nodes. For example, see Health, Damage, and Defeat.

There are six node categories that include dozens of nodes that you can use to define any scenario you can imagine. These categories are located in the Node Panel to the left of the Node Map  and are listed in the table below. 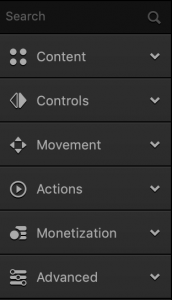 For details on accessing the Node Map and adding nodes to it, see Node Map Workspace.