Our Buildbox Community Continues to Grow!

Wow, our no-code community of developers is now over 650,000 strong! 💪 We have Buildbox users from all over the world, making cool 2D and 3D games with our software and finding success in the App Store. Some Boxers, have even managed to quit their day jobs and pursue making games full-time using Buildbox. We’re so proud to be part of this incredible movement.

Our mission from the very start was to create a software that enabled anyone with an idea to make a game, regardless of their technical skill. It’s amazing to see that we’re not just making an impact but changing how games are made with our software.

Buildbox is the only 2D and 3D game engine that gives you the option of building apps with no-code game-changers like brainboxes, templates, and smart assets or low-code via smart nodes. Our software is also less resource-hungry than other tools out there. It only requires 400 MB of storage space, a single-core CPU of 32 or 64 bit, and just 6 GB to run. The iOS runtime is -5 MB, and the Android runtime is -15 MB. So, it’s light on your hardware and super easy to use, whether you’re on a PC or a Mac. You can see exactly how we stack up against other platforms in hardware requirements below:

Buildbox Versus Other Game Engines 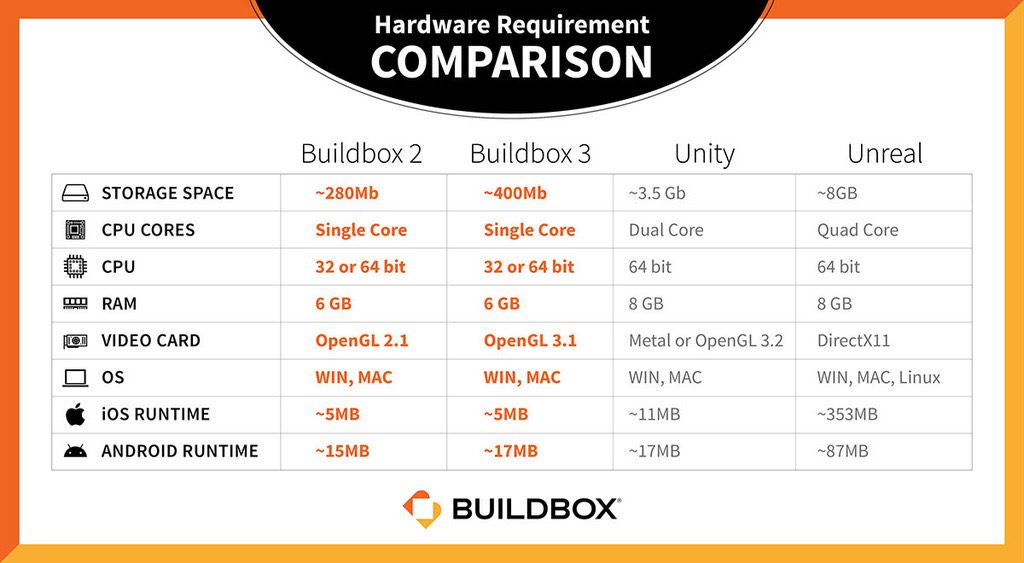 We also have developers from not only the US but different countries using Buildbox too. Some of the top countries that use our software include India, the United Kingdom, the Philippines, Romania, Brazil, Canada, Morocco, Turkey, France, and more. There are men, women, and even kids now using Buildbox to make games with no-code from all around the world.

Top Countries That Use Buildbox

With Buildbox, anyone can make a game. But here’s the interesting thing, many of our users have also found a lot of success and made hit games as well. Buildbox’s advanced no-code features and rapid prototyping abilities give developers the freedom to focus on their game’s design instead of writing endless lines of code. The result is often a very polished game that’s top-charting and feature worthy.

Hit Games and the Developers Who Made Them

Long-time community member, Darius Guerro is from the Philippines. He founded his own indie studio, AppSir Inc., and used Buildbox to create The Last Yandree and Sorority Rites, both stunning visual novels. He went on to create an experimental horror-based platformer called Dere .Exe and later it’s sequel Dere Evil .Exe which was ranked Top 100 in all games and featured worldwide.

“To be honest, I’ve tried a dozen other engines before I ended up with Buildbox. I don’t think any one of those engines could have made Dere. Exe. Theoretically, they could, but it would take at least six months longer.” – Darius Guerro, AppSir Inc

Romanian developer, Ovidiu Tepes from Crevasse Studios stumbled across Buildbox one day when he Googled, ‘make games without coding,’ and he’s been using our software to do just that. His puzzle memory game called Cessabit took less than a month to create using Buildbox. It was ranked as one of the Top 100 Paid Games in the US and 19 other countries. Vestigium, another fantastic puzzle game from Tepes, also skyrocketed up the charts. Both games were featured as ‘Game of the Day’ in app stores around the world multiple times. He’s also won our Buildbox Game Jam twice. However, Tepes doesn’t stop at making games; he also is dedicated to learning and helping other game developers in the community by sharing Buildbox templates, game art, and tutorials.

“Not having to write code, the very intuitive user interface and the insane development speed make Buildbox my favorite engine. With Buildbox, the process of game development is so fast and enjoyable.” – Ovidiu Tepes, Crevasse Studios

TapMen Games is a two-man studio that’s also based in Romania founded by twin brothers, Radu and Vlad Popa. With their eye for design, and Buildbox as their go-to game development tool, they’ve managed to create an impressive roster of successful games. Some of their hits include Dash n’ Blast, Orbit Strike, Skate Fever, RotaMaze, Toy Swipe, and Bloom, which have all either reached the Top 100 in various countries or been featured in the app store. Their game Enter the Color also built with Buildbox is a 2020 nominee in the International Mobile Gaming Awards!

TapMen Games’ Cyber Drive, an entry in our cyberpunk-themed game jam, won second place and went on to be featured in the app store in countries like Australia, Japan, Russia, and France. It also was ranked Top 100 in 11 countries!

“Buildbox is the only game engine we’ve ever used. We have almost no coding knowledge, so it was perfect for us. And it seems now with Buildbox 3; we don’t really have to know any code to make the type of games we want.” – Radu Popa, TapMen Games

Vikas Pawar from Singapore and Rakshak Kalwani from India make up the two-man studio, VRPlaying Games. These talented developers and members of our BB community have created several hit games. Their first big success, Park Tiny Cars built with Buildbox was featured all over Europe. It also ranked Top 100 in both the puzzle and racing categories in the app store. Then the duo decided to participate in our month-long cyberpunk-themed game jam and created SwipeTrix for their entry. When it was released in the app store, this highly-polished but simple swiping puzzle game went on to be featured in 33 different countries around the world. It also was selected as one of the picks in the ‘5 New Games We Love’ story in the US app store. 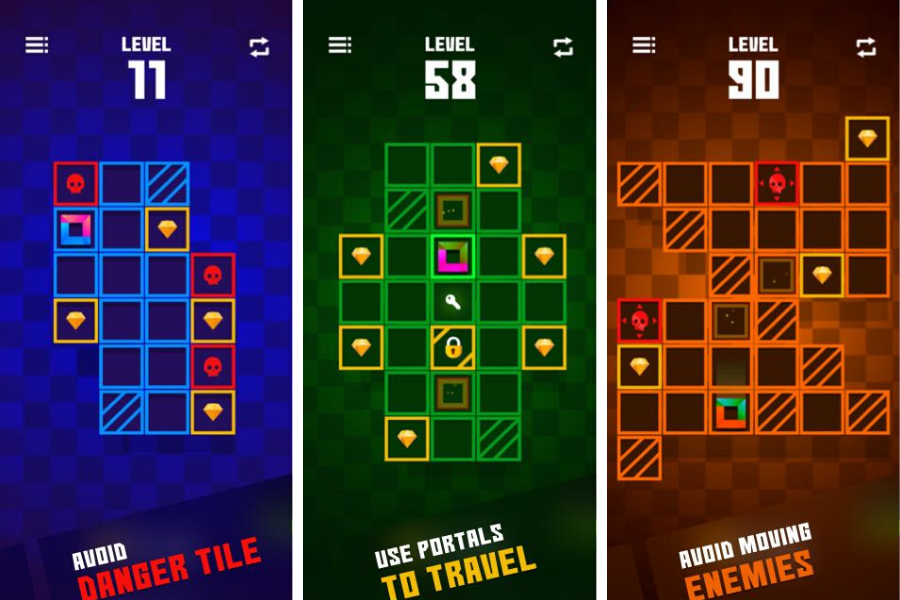 “Our UA Budgets are zero, our marketing visuals aren’t like EA!, but one thing we strive for just like the big guys is to never compromise on quality.” – Rakshak Kalwani, VRPlaying Games

As Raksak Kalwani states, ‘never compromise on quality.’ With Buildbox, our growing community of no-code creators can make high-quality professional games at record speed. There’s no other platform like it. As we continue to grow and expand our software with our upcoming update, we’re looking forward to more developers from different countries, making their mark in the app store. We hope you’ve been inspired today!