Number One iPhone App Made with Buildbox

Color Switch just reached the #1 position in the US App Store. The hit action arcade game was created by David Reichelt in only one week solely using Buildbox. Color Switch is currently ranked number one in over 100 different countries including United Kingdom, Canada, Australia, and Sweden.  The game is published by Fortafy Games and the concept was created by David in only 30 minutes.

Reichelt is not only a Buildbox customer but he’s also an active part of our official Buildbox Community Forum as a moderator.  While tons of congratulations poured in, he shared a bit of his success story:

“Wow, I can’t believe it … it feels unreal still. Honestly it never would have happened without Trey [Buildbox Founder] and his dream of making amazing software that would be able to be used by anyone. To this day I can’t write a line of code yet I have the #1 game in the USA and many other countries. Thank you Trey and your awesome team!”

David was recently interviewed by his local ABC News station about the success of Color Switch and how he created the game with Buildbox while being color blind:

Currently, there is also another Buildbox game breaking the top charts. The Pit, which is published by Ketchapp, is currently in the Top 50 All Apps in the United States.  Prior to Color Switch the most successful game made with Buildbox to-date was Sky, which was created by our lead developer Nik Rudenko and also published by Ketchapp. Sky reached the #7 spot in the US charts.  During the last year we’ve seen Apple feature 25 different Buildbox games and 31 games breaking the Top 100.  This is more than all other game building software platforms combined. 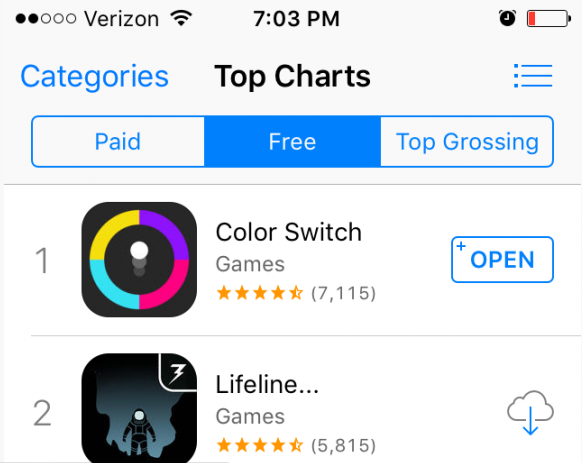 Color Switch is a challenging reflex game that Gamezebo recently coined as the ‘Next Flappy Fix.’ In Color Switch players have to tap a bouncing ball through different obstacles. As the ball color changes it must match the obstacle’s color pattern in order to pass through. With each color switch there’s also a different power-up to use. The game features unique physics with a fast fun pace to make it a challenge and equally addicting.

Congratulations to David Reichelt, Fortafy and the team behind this phenomenal success.

Update:  It has come to our attention the publisher of Color Switch has recently teamed up with the popular development house Eyebox Games.  Together they have submitted an update to Color Switch that is ported from Buildbox to native code so they could add custom features.  This new version plays identical to the original in gameplay and we’re excited to announce that every custom feature they added will be available in Buildbox 2.0.  Buildbox 2.0 will be officially released in Q1 2016 and can be tested now through our early access program.