Recently, the team over at Edamame Reviews created a new developer tool ranking system to help game developers decide on the best game building software and frameworks in which to use.

According to Edamame Reviews, the data shown in their ranking of the most used frameworks were collected directly from Review Submissions sent in by mobile app developers and is the most accurate and unfiltered data available.

The results were quite surprising.

Buildbox was ranked in 3rd place as the most popular developer tool with 11.1%. Although Unity was in 1st place followed by the framework XCode as most used, being ranked alongside the top contenders in the industry is not only an honor but a huge accomplishment as well. 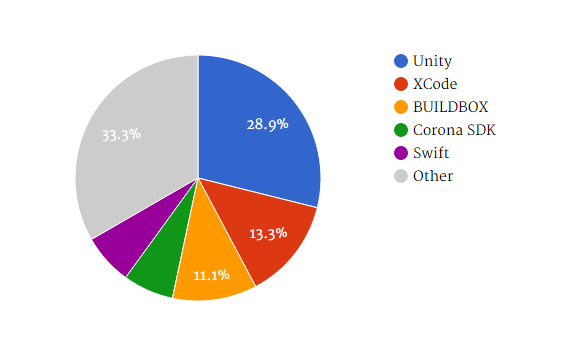 For those unfamiliar with the site Edamame Reviews. It’s a mobile game review website that likes to predict what’s coming next in the world of apps. Along with new daily app reviews and postings they also feature a weekly ‘What’s Trending?’ page where they spotlight a popular game theme.

You can check out the chart and view more info here: Edamame Reviews Developer Tool Ranking