Released in June 2019, Rocket Sky! is a hyper casual mobile game about managing your rocket’s fuel and acceleration to soar high into the galaxy. Published by Kwalee and developed by Moscow-based developer DP Space AG, the game has racked up more than 22 million downloads so far. It has also been a #1 app in 11 countries including the UK, Canada and Germany, as well as a #1 game in the arcade category in more than 52 countries.

While we at Kwalee have become known for developing our own global hyper casual mobile hits, including Draw it and Shootout 3D, we also publish games by other developers and Rocket Sky! has been one of our biggest publishing success stories to date.

But how has the game been so successful and what have we learned from it? 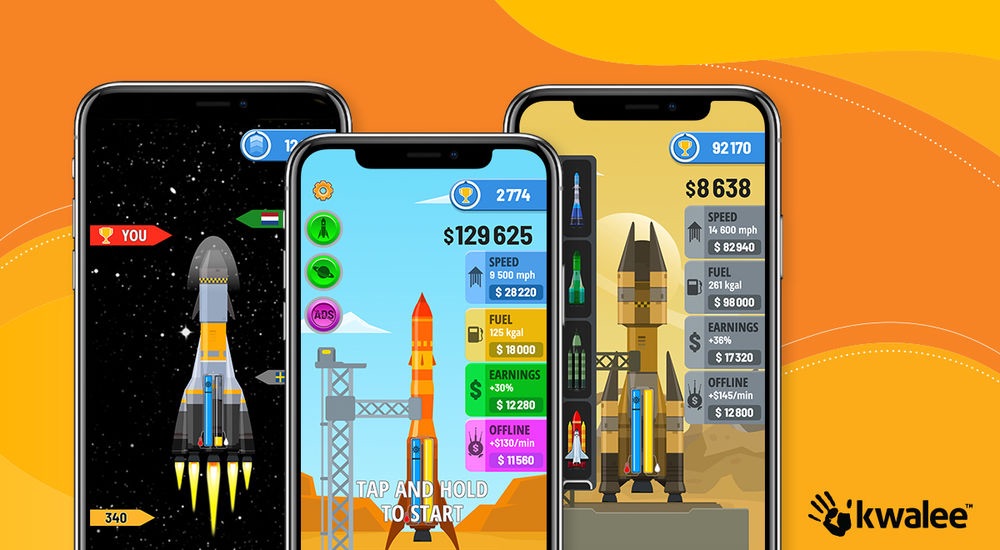 We were new to publishing in early 2019 when DP Space AG came to us looking for a publisher for the game that would become Rocket Sky!, but its potential was immediately clear.

The prototype immediately impressed us, being reasonably close in look and feel to the game that we know today and with lots of content. In early tests we also saw that players engaged with the game far more than was common for a hyper casual game, which was really encouraging.

Despite this, the game was not generating installs through video ads nearly as much as a successful hyper casual game needs to. This is something that we needed to fix.

Our first step was to hold creative clinics with the aim of improving ad performance. Some of this involved the Kwalee creative department implementing whole new animations, rocket skins, effects and more in their video ads to test their appeal among players.

This was a great way to establish through ad engagement that certain visual changes to the game would be well-received among players, which in turn influenced those same changes to be made in-game.

Perhaps the most impactful change, however, was a very straightforward UI alteration: moving the speed and fuel meters from the top of the screen to the rocket itself. This simple change played a massive part in us doubling the efficiency of ads, which paved the way for Rocket Sky! to be as great a success as it has been.

The lesson here is to always tweak and test, since even the smallest alterations can have a massive impact!

Since our publishing department was very new when we began working on Rocket Sky!, the relationship we formed with DP Space AG was key for us in defining what kind of publisher we wanted to be.

Building on our existing philosophies for making games internally, we wanted to find a sweet spot between efficiency and a more human touch, communicating frequently with developers and learning from one another.

DP Space AG are the perfect team for this and were fully on board from the start, understanding the feedback points we gave and executing quickly. The key to a productive publisher-developer relationship is good communication to eradicate uncertainty, so it’s invaluable when both sides are responsive and happy to ask questions.

We continue to work closely with DP Space AG’s team, for whom Rocket Sky! is their biggest game to date. We released new content into the game around a month ago, and continue to discuss new game ideas regularly with the Moscow-based developer.

A Publisher’s Experience Can Accelerate Success

The success of Rocket Sky! validated many of the processes that we were still building at the time and proved to both us and DP Space AG that there was significant mutual reward in hyper casual game publishing.

We saw firsthand the impact we were able to have on the game, and how quickly these improvements yielded major financial rewards for both us as a publisher and the game’s developer. This convinced us to expand our publishing efforts even further.

We now have a publishing team of nine people – a number which is growing all the time – and have greatly improved our efficiency, culminating in our latest game OverTake being globally released within just two weeks of the publishing deal being signed!

Simply put, working with a publisher and taking advantage of everything they have put in place can not only significantly improve your game’s performance, but also help get it to market more quickly!

The game continues to perform very well and is still a very strong earner for both us and the developer. We expect this to go on for a long while to come!

If you’re interested in learning more about publishing at Kwalee and possibly working with us to make your Buildbox creations global hits, you can learn more on our website, or of course take part in our hyper casual game jam! Who knows, what you create could become a chart-topping success like Rocket Sky!

Working on all areas of Kwalee’s hyper casual game publishing pipeline, from fielding game submissions to overseeing global launches, Jack Griffin has played a key role in hits including Rocket Sky! and OverTake. He has been involved in Kwalee’s publishing department from the beginning and contributed to its rapid growth.