For mobile game developers, marketability is the most important test of a new game concept. The goal is to determine whether or not the market is interested in your product before you invest in full development and global launch. With the app stores highly saturated, among a sea of competition, it is crucial for developers to not only make a good game but to make a marketable game. It is this – marketability – that will enable a game to scale its installs from user acquisition campaigns and set the foundation for a good game business. This article will explain how to run marketability tests – from which key performance indicators (KPIs) to measure to what you need to do after the tests – to help you create games that scale.

Things To Consider Before Launching

Before diving into marketability testing, let’s take a look at mistakes developers often make when it comes to testing before a global launch. Many developers focus their attention on metrics like retention, average revenue per daily active user (ARPDAU), and short-term average revenue per user (ARPU). These metrics are focused on the monetization side of the business, which sounds logical. After all, if a game is able to obtain users with high Lifetime Value (LTV), you can be confident enough in the business potential of the concept to start full development and a global launch…right? Wrong.

That’s because high LTV games don’t always make the best businesses, which is to say a game will not survive as a profitable and sustainable business if it doesn’t have a large enough market interested in downloading it. Just like any startup, product-market fit is the foundation for success, and without it, you will most likely fail. But, luckily for you, there is a pretty straightforward and accurate way to avoid this, reduce uncertainty, and launch a game with a high chance of succeeding.

At its core, marketability testing involves running an ad to a limited audience and measuring its performance. But how do you know what your ad should look like, which metrics to track, or what to do afterward? Keep reading to find out.

In a marketability test, it’s most important to initially test the core gameplay of your game. This is straightforward for hyper-casual developers, where marketability tests use a simple prototype of the concept, but for those of you making casual, mid-core, or hardcore games, choosing 20 seconds of gameplay that hits all the keynotes requires a little thought.

Concentrate on the area of the game that will be most played, and that will most accurately reflect the gaming experience once users download the game. While creatives that show embellished or even fake gameplay are used by some developers after the game has been launched globally, at this early testing phase, the point is to accurately evaluate the appeal of the core gameplay – so unrealistic creatives shouldn’t be used during this stage.

In terms of the ad format, both playable and video ads work well. The latter is quick and easier to deliver but offers a less holistic experience of the game as users are just watching rather than interacting. With playable ads, users get a better feel for what the game is like, which ultimately will help you make a more accurate evaluation of the performance results you get. They do, however, take longer to make.

Marketability tests aren’t generally expensive: you just need to get enough installs to understand the install per thousand impressions (IPM) – the litmus test of your game’s marketability. More on that below. To run a marketability test, begin with one ad creative showcasing gameplay in the U.S. and bid on a Cost Per Install (CPI) that’s lower than the LTV prediction for your game. If you do not yet know this, then base your CPI bid on the benchmarks from your genre. Your ad network partner will be able to provide these.

The key metric when it comes to evaluating a game’s marketability is eCPM (effective cost per thousand impressions). Campaigns with the highest eCPMs will be the ones at the top of ad networks’ data science ad serving models – meaning they will get the most impressions and scale the fastest. 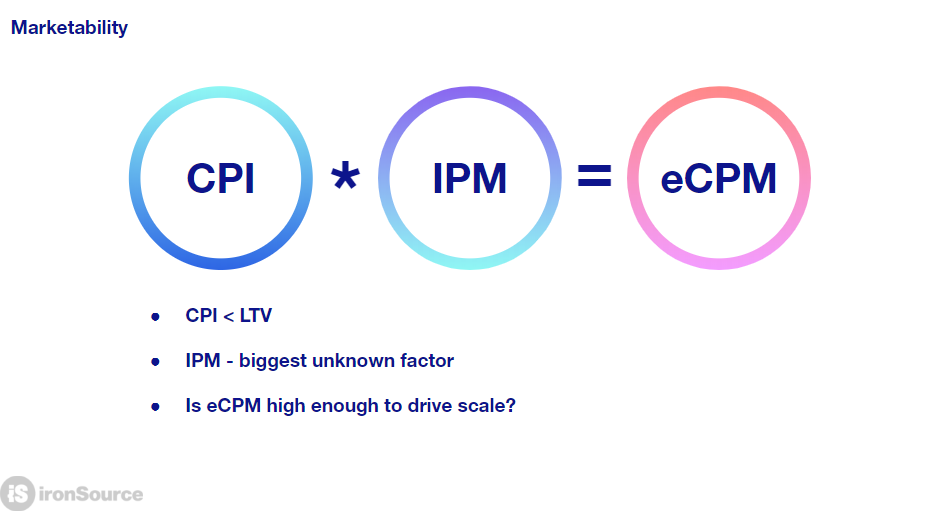 IPM is the number of installs generated for every thousand impressions and shows the public’s response to your game. The higher the IPM, the more marketable the game is. That, combined with a low CPI, is the perfect recipe for a game that can scale and profit, ultimately generating a high enough eCPM to enter what we call “the marketable zone,” which is an eCPM of $10-$12. 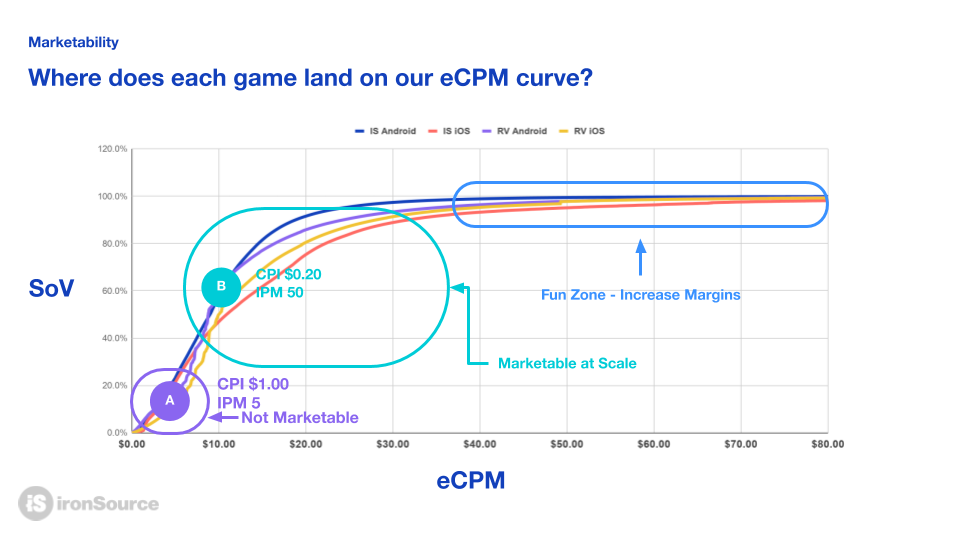 Step 4: Run the Test Until the End of a User’s Lifetime

Continue running your marketability campaigns through ad networks until you reach the end of the lifetime of the user. For hyper-casual it’s quick (about a week), but for other genres, you’ll need at least a couple of weeks to collect enough data to determine if LTV is up to par with genre benchmarks.

After this, you can go full steam into finishing off your game’s development, confident that it has a good product-market fit. If you’re a hyper-casual developer, a genre of games that are often based on short-lived cultural trends, make sure to develop fast (under a month). Otherwise, you risk your concept becoming irrelevant.

Once you’ve wrapped up development, it’s time for the global launch. Stay tuned for the follow-up post on how to launch your game globally.