What’s the secret to game marketing success? And which app promotion strategies are the best at delivering results?

Well, we reached out to a few of our most successful Buildbox developers that have become app experts at not only creating great games but gaining massive exposure for them also, to get their opinion on the topic.

The two questions asked were:

The answers and insights from these top developers were nothing short of amazing! Check it out:

“I don’t think there is a one size fits all approach. You really need a holistic view.”

“Make no mistake it can be very hard for an indie developer to market their own game. However, if you are going it alone you need to cover many of these bases:

– Share on social and forums on your progress of your game – People love to follow your progress!
– Post trailer/footage to YouTube
– Utilize FB ads if appropriate
– Apple Search Ads
– Make trend based games
– Post to Product Hunt
– Paid Social Campaigns
– If you make an awesome game contact Apple for a potential feature
– Influencer Shout outs
– Partner up with an Influencer
– App Store Optimisation (ASO)
– Start to build a brand
– Keep knocking on doors – One will open sooner or later!

As far as app promotion strategies go, I don’t think there is a one size fits all approach. You really need a holistic view. It totally depends on the game/app. But like I mentioned above there are a lot of ways to go. If I  had to name one strategy it would be: Make a great game – It can really be that simple. Marketing a great game is a lot easier than marketing a bad one.

Honestly, that’s the hardest part. If you make a great game – you’ll suddenly have options like pitching Apple for a Feature.”

DeadCoolApps is a small, indie mobile game studio based in Edinburgh, Scotland. Founded by Simon Crack in 2012, they have created over 300 apps, reached the top charts many times and generated tens of millions of downloads. DeadCoolApps are proud to have been Featured by Apple 14 times in New Games We Love.

“Documenting your journey of building the game is by far the best way to build up some engagement, and it also has the side effect of keeping you accountable and on track time wise.”

“Start early, and I mean early.

As soon as you have anything at all to show, start posting on your blog / social media channels. These can be early sketches or concepts, and videos will always perform better than flat images.

Post regularly, make the commitment and weave this into your development cycle. People live there lives in weekly cycles, so be sure to at least post on the same day every week. People don’t notice announcements; they notice consistency.

Keep posting even if no-one is watching, commenting or reacting, especially when starting out. It can seem like a waste of time, but there will be a point when you’ll start to see a little traction, the biggest companies in the world all started with that first post.

Documenting your journey of building the game is by far the best way to build up some engagement, and it also has the side effect of keeping you accountable and on track time wise. There’s nothing like a bit of public accountability to keep you pushing on, certainly through the tough times where you’ll need to plow through and complete the project.

We always post on our Facebook page every Friday ( and often more during the week ) and always post screenshots or video’s for #screenshotsaturday on Twitter. From the 8-12 week development cycle of our latest game ” • Glide ” ( Featured by Apple in 112 countries ), we posted pretty much as soon as we had something to show and continued right up until our launch day. 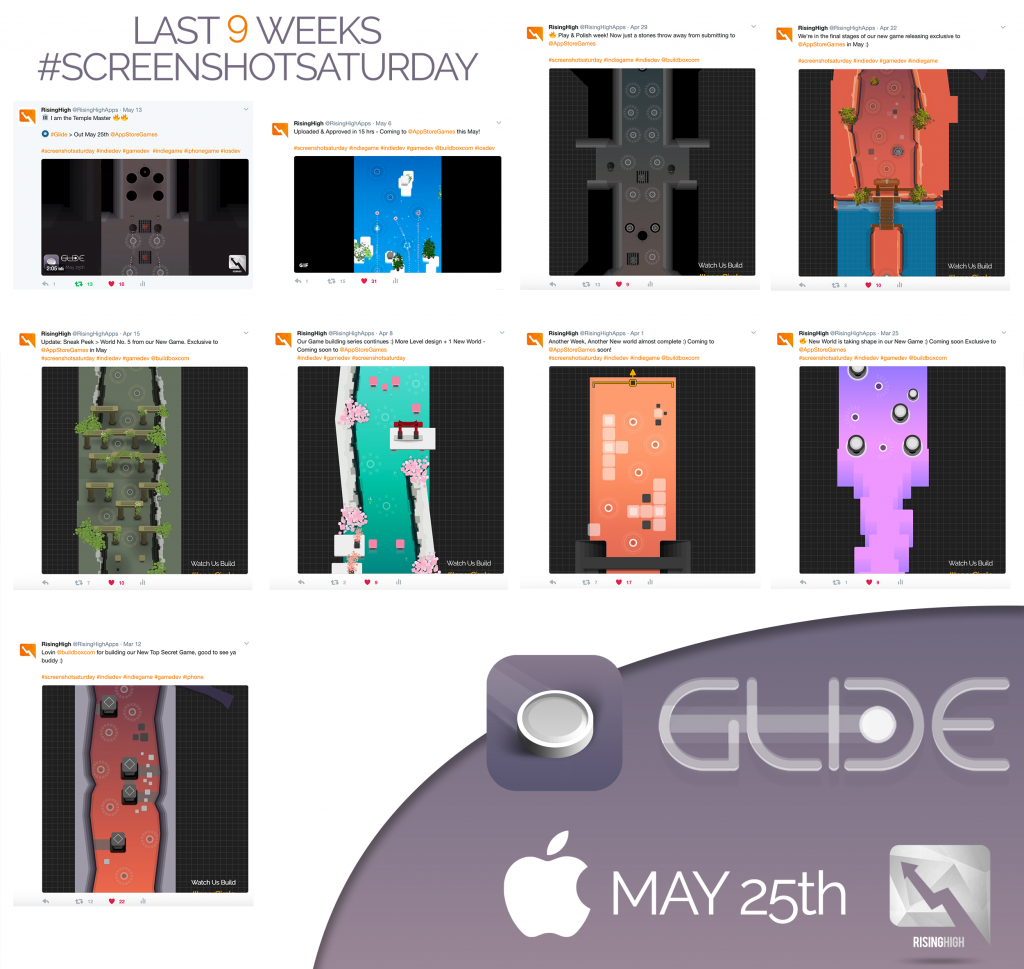 While there is an argument for worrying about copycats, the biggest issue is not being ripped off or cloned. This will always happen eventually, the real problem is not being seen at all.

Keep an eye on the biggest mobile game focused websites out there and pay attention to articles that they are interested in. Make a note of the editors and follow them on social, like their tweets and occasionally reply to them if you have something genuine to say, this can be just enough to break that ice when you finally come around to pitch them.

It’s no longer about huge promotional pushes or bursts, but more to do with long-term updates and prolonged, sustained work. Sure, these social media blasts and influencer promotions work and can be super effective, but to maintain ranking, you’ll still need a solid game to once that blast tap is turned off.

The biggest app promotion you can do is build the best game you can, based off solid research and proven mechanics. I realize this sounds like a poor answer, but actually, it’s the honest truth.

While great marketing can get you exposure for your game, you have to be honest with yourself and ask if your game has the quality, polish and the x-factor that the market wants.”

Kevin Wolstenholme is the founder of the UK-based indie game studio, RisingHigh. They’ve been featured by Apple in ‘Best New Games’ 12 times along with several ‘Get Your Game On’ features by Amazon.

“I recommend failing fast and a lot. You must first make a lot of bad games before you get to your good game.”

“Well, of course, you need to make a good game. This is easier said than done. You have to study game design, analyze games, and make games. I recommend failing fast and a lot. You must first make a lot of bad games before you get to your good game. Once you do get there, you don’t need to do too much other than email a publisher and send a short trailer of your game. If it’s a good game, it will speak for itself.

If you are doing the marketing yourself, it would be good to team up with a social influencer these days. Any marketing will only really work with a good product.”

David Reichelt is a game designer and creator of the hit Color Switch (which has amassed over 150M downloads worldwide). It was also ranked #1 in All Apps in over 50 different countries across the globe and broke the App Store record for holding the #1 spot for the longest length of time, a jaw-dropping 27 days.

“Invest the biggest part of time into improving art-style and game graphics.”

“The game graphics and screens should sell a game to players. Invest the biggest part of time into improving art-style and game graphics. Also, make good video trailer and localized description. When only one screen can sell the product –  you did a great job.

Try to find contacts with platforms and show them your game, ask feedback. Always send press releases and announcements to press. Do it in few weeks before release. Post topics on gaming forums and tell players about your game.”

Akim Kasabulatov is an Indie developer. He’s been making games professionally for several years and playing games since he was five y.o. His accolades include Osteya: Adventures (App Store Best of 2016) Developer and the Apple Featured game, Dropper!

Game Marketing Tips from the Pros

I’d like to thank all of the developers Simon, Kevin, David, and Akim for taking the time to share some of their best game marketing strategies and advice.

Here are some key takeaways:

Remember, game marketing isn’t easy. Don’t give up. Keep at it. Failure is just success in progress. You have to keep making games, learning, improving and promoting until you find success!