Top 12 Scary Halloween Games to Play Built With Buildbox (Play at Your Own Risk!)

In honor of the season, we’ve rounded up some of our favorite scary Halloween games to play! All the games that made this list were built with Buildbox and have a creepy theme or twist. So, if you love horror-themed games and things that go bump in the night, you may find yourself playing these titles not only this Halloween but all-year-round. Whether you’re into nightmarish platformers, endless monster runners, zombies, or haunted mansions, there’s something on this Halloween games list for everyone.

Prepare yourself for a bone-chillingly good time with these must-play mobile games built with Buildbox!

Top 12 Scary Halloween Games to Play on iOS or Android

AppSir Games’ Dere Evil Exe is a terrifying meta-horror pixel platformer that has been haunting the charts since it’s release. In the game, players must guide their hero named Knightly on an eerie journey through a pixelated world of mystery. Deadly monsters called corruptions use fear as a weapon. This challenging game is filled with plenty of scares. There’s also Dere EXE, Sorority Rites, and The Last Yandere A Visual Novel.

Fun Fact: Creator of the game and founder of AppSir Inc., Darius Guerrero, was inspired by the ‘Saw’ films for his games’ unique plot-twists.

Another AppSir title that makes our list of scary mobile games is HopBound. It’s the fifth game in the horror series and takes place two years after the events in Dere Evil Exe. In the game, players become Mayumi, a new intern at the company assigned to test out the endless runner, HopBound. However, in this psychological 16-bit horror platformer, an ominous presence is haunting the game. Prepare to be terrified! 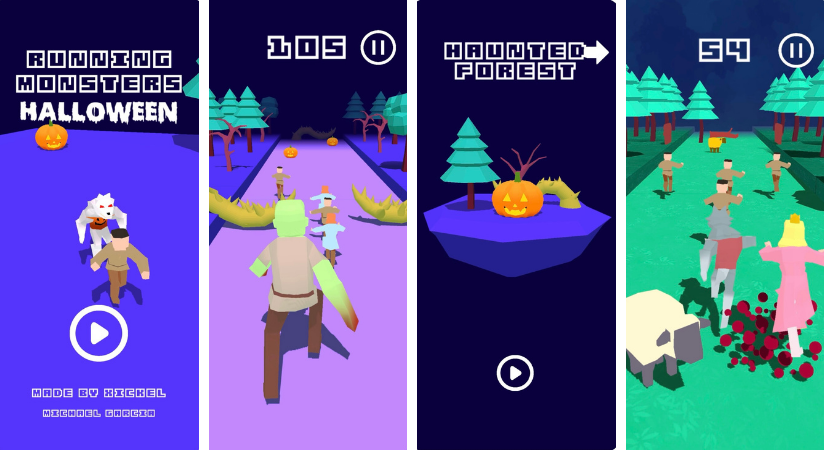 Running Monsters by Michael Garcia / Xickel was a runaway monster hit. It was ranked #38 in games and was featured across the globe. In this endless runner, you’re a werewolf on a rampage, running through a forest chasing villagers down to devour them for a high score. With its latest Halloween update, you get to run wildly through a new haunted forest and unlock cool new Halloween characters like Pumpkin Wolf, Zombie, Skeleton Walter, and more. It’s a fast-paced horror-themed thrill ride that’s worth checking out.

Fun Fact: Running Monsters was created with Buildbox in only three weeks! You can learn more about Michael Garcia / Xickel in our recent interview. 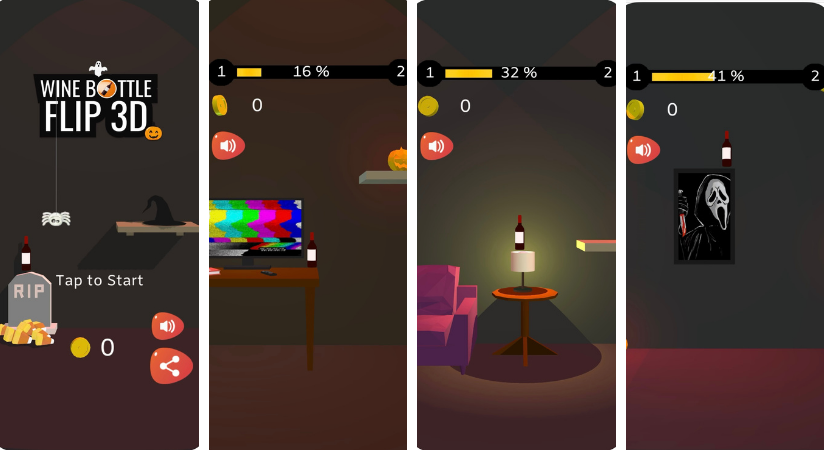 Wine Bottle Flip 3D: Halloween edition by Full Spectrum Services & Codemire takes players on a spooky bottle flip challenge in a haunted house. The mobile game is Halloween themed with rolling pumpkins, scarecrows, and frightening surprises around every corner. If you love flipping games, definitely check this one out!

DREAM ON A JOURNEY

Dream On A Journey is nightmarish platformer by Adam Rogan of AD Designs that plays much like the indie classic Limbo. With two challenging nightmare modes that players must try to make it through: Journey and Playground. In Journey mode, you have to try to get your character through the hellish nightmare, avoiding danger and collecting keys along the way.

In the Playground mode, players have to be quick as a deadly mist is chasing you. Players have to outrun the fog to survive. It’s somewhat similar to Stephen King’s The Mist, very eerie. It’s a lot of fun to play.

Fun Fact: Dream On A Journey was featured by both Apple and Google. Like Dere EXE it’s one of our All-Stars.

Skyler Studios and A Dragon Force Story combine humor and horror in Pumpkinbutt’s Halloween Dream. If you’re looking for something playful and challenging that will make you smile this Halloween, it’s worth downloading. Get ready to dive deep into a nightmare like never before!

Another must-play on our Halloween games list is Spooky Mansion by Adam Rogan of AD Designs. Help guide a grumpy Frankenstein through a haunted mansion with danger lurking behind every closed door. It’s a fun light-hearted game with awesome sound effects. It’s hard not to get into the Halloween spirit when you hear that evil, wicked witch laughter in Spooky Mansion. 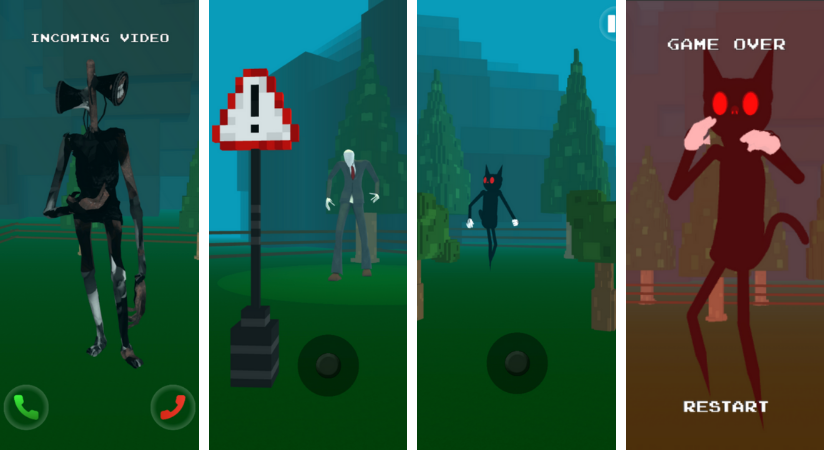 Explore a farm of horrors in Find Me: Scary Cat by Albert Rodrigo. Players must attempt to take a walk through an eerie farm while avoiding the monsters that reside there. The rolling fog makes it hard to see what’s creeping behind you. It’s a fun and, at times, scary avoidance game that any horror fan would enjoy.

We all know it’s just not Halloween without pumpkins and candy corn right?! In Chris Trudeau’s Halloween Smash & Run game players have to explore a spooky graveyard as cool pumpkin characters, collect candy while trying to avoid the deadly traps and spiders that await. Test your skills and see if you can escape true evil.

Fun Fact: A Halloween poster inspired the entire game! Oh, the things you can do with Buildbox!

Conrad Schmidt’s Skull Sugar is one of those Halloween games that you’ll find yourself playing all year long. This ghostly game transports players deep into the underworld. In the game, you have to help Skully the dangling spirit collect Sugar Skulls for the coveted ‘Day of the Dead.’ It’s no easy task. Luckily the creator, Conrad Schmidt, left a playing tip. Try to ‘stalk up’ on skulls, near the end of the last level. If you can make it that far?

Wyverin Entertainment’s Hot Rush: A Horror Adventure Game is another must-play mobile game this Halloween game. In this 8-bit platformer players, have to help Antonio recover his lost memories as he explores lava caves, haunted forests and attempts to make his way through cursed mazes. Avoid zombies, skeletons, and other creatures of the night as you try to get to the end in time. This game has over 100 challenging levels to keep you busy late into the night.

Happy Halloween from the team at Buildbox! 🎃