TicJoy Studios’ Edson Junior Inspires the Next Generation of Devs

Brazilian game developer and CEO of TicJoy Studios, Edson Junior is a passionate Buildbox user who believes in the power of the no-code movement, and the impact it can make on today’s generation — the MakerGen. So, he recently decided to share his knowledge of the software and become an event organizer at this year’s Global Game Jam Next in Orlando, Florida. Organizing this year’s game jam geared towards young kids is just the start for Edson. His goal is to eventually create full courses on using Buildbox empowering children with the skills and confidence to design their own games.

Edson has been developing games for the past six years and had always found himself working harder than he wanted to during the development process. He never liked programming, which led him to hiring programmers in order to help bring his game ideas to life, but that all changed when he found Buildbox. Edson has been able to focus on what he enjoys doing the most — design. And now he’s passing along what he’s learned to the next generation of creators too. Currently residing in Orlando, Florida, Edson has found success making games like Pippos Quest, Antarianos, and Urna Wars using our software.

We were honored to have the opportunity to chat with Edson Junior from TicJoy Studios about his game development journey, teaching kids game design, and his experience hosting this year’s Global Game Jam Next using Buildbox.

Buildbox.com: Can you tell us a little bit about your background and how you got started as an indie games developer?

Edson Junior: I started my gaming history five years ago after a 17-year career working with IT tech support. Working with games has always been a dream since childhood. After 17 years in the IT field, I decided to take a risk and do something that I liked and really wanted to do. At first, I took a postgraduate course, and at the end of that course, I launched my first game in partnership with a YouTuber and the game reached 120,000 downloads.

Buildbox.com: Doing what you love is important. What was the biggest challenge that you encountered when you were getting started as a game developer, and what did it teach you?

Edson Junior: I learned that you always have to think about a market for your game and a way to make an effective marketing plan for it. Always look for a way to make your games known. I still think that creating a demo and showing in gamer communities and gathering feedback is the first step. After that, you must fix the game and improve it. And as a third step, looking for publishers is the best alternative for me to have aggressive and competitive marketing. When you think this way and launch your first game, that game opens doors to other opportunities.

Buildbox.com: How did you come across Buildbox, and how has it help to improve your game development process?

Edson Junior: I found Buildbox in internet searches. In my first games, I worked with game design and production, but I always wanted to create my games and didn’t like to program. With Buildbox, I was able to develop these games and much faster than using other engines.

Buildbox.com: So far, you’ve created four games with Buildbox. What was the inspiration behind your latest game Pippos Quest?

Edson Junior: Pippos Quest is an advergame and was created for a snack company in my city in Brazil. The story behind this game is interesting. Since I was a child, I always ate the snacks from this particular brand and had wanted to make a game for the company. One day I created a demo, called them, and set up a meeting. I was able to close the deal and sold my first Buildbox game for $3,300! I was so happy, and it encouraged me even more to work with Buildbox.

Buildbox.com: You’ve recently hosted the Global Game Jam NEXT in Orlando geared towards kids age 12 to 17 years old. Tell us about the event and what made you decide to host this year?

Edson Junior: In my city, João Pessoa, Brazil, I participated in the organization for Global Game Jam for four years, and for three of those years, I made games with Buildbox. In the 2018 edition I made a game, the Droid Escape that I later sent to ID @ XBOX and today I am working on this game for XBOX One. Thanks to Buildbox today, I have the great pleasure of saying that I am making a childhood dream come true. I’m launching a game for a console. A few months later, Global Game Jam started working with children, Global Game Jam Next and they invited me to headquarter in João Pessoa, Brazil. Unfortunately due to some problems I could not hold the event last year. Now in 2019, I was invited again and held the event here in Orlando. 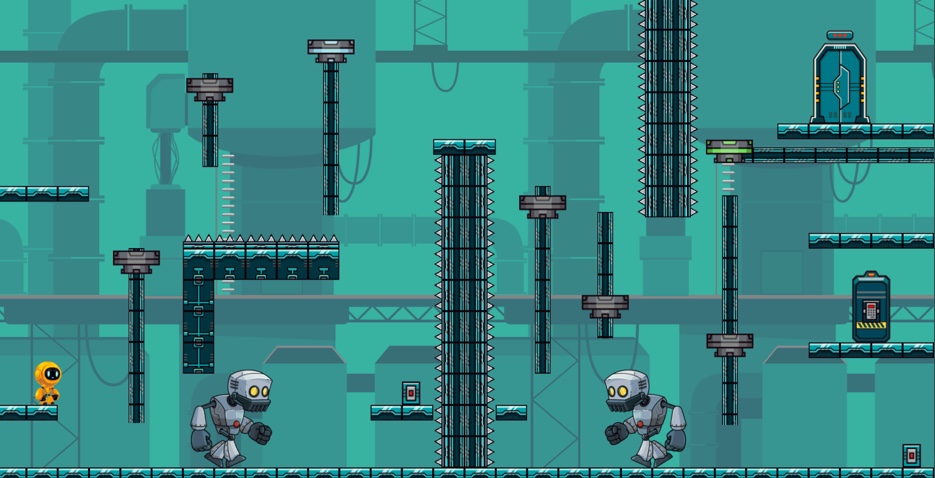 Today, I believe these children have a promising future in this area and can start realizing that same dream much sooner than I did. That was one of the biggest reasons that made me organize the event. At our Global Game Jam Next event here in Orlando, we had children that were aged 8-12 years old. We did this age group to take advantage of students from the Little Brasil Club School that was one of the organizers of the event.

Buildbox.com: What are the benefits for children learning to develop games?

Edson Junior: The main benefit in my view is the contact with STEAM (Science / Technology / Engineering / Art / Math). Game development provides children with immersion in all these areas of learning, and this is critical to their intellectual growth.

Buildbox.com: How easy is it to use Buildbox to introduce new developers to game design?

Edson Junior: The fact that you’re not using programming is a big differential. I’ve seen several courses and events where kids used other engines to create games, and the result was very slow and sometimes frustrating. I have nothing against programming, and I believe learning to program is also very useful for children. But for young developers, being able to see your game up and running in minutes on their first try is priceless. It’s an experience I had with them this weekend that was very productive and fun. It was instrumental in keeping them excited throughout the event.

Buildbox.com: What was the Global Game Jam NEXT turnout this year and how your students’ overall experience?

Edson Junior: The highlight this year was the speed with which participants were able to create their games. Buildbox made this process much faster, and we were able to create games with collectibles, enemies, platforms, and very challenging levels of difficulty. It was really nice to see them playing the games and challenging the other participants to play their games. Dividing them into teams was also really cool because they were able to participate in game design, sound design, art, and the complete development of the game. Overall the game jam went beyond my expectations and the support of Buildbox as a sponsor and Little Brasil Club School as an organizing partner was critical to the success of the event. 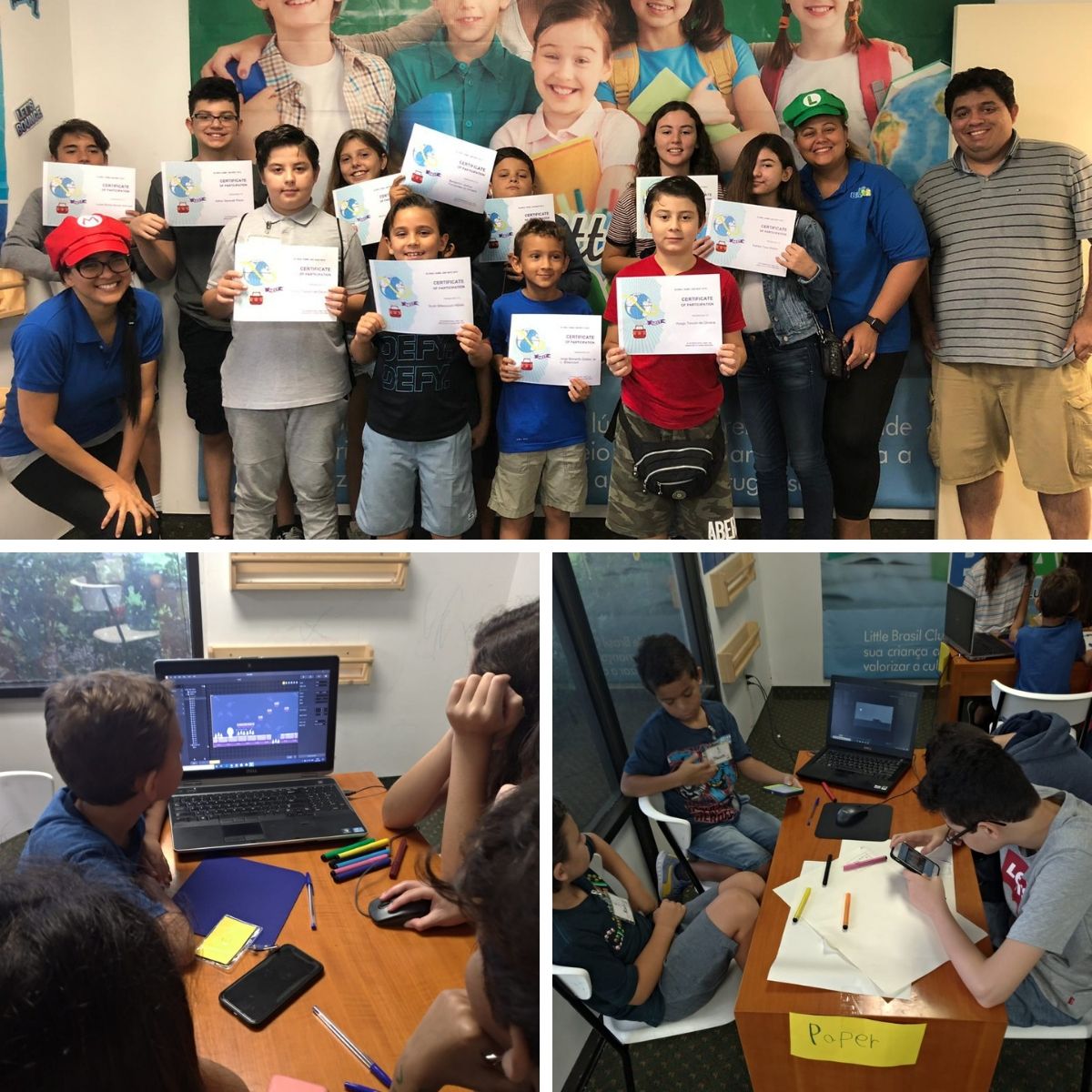 Buildbox.com: That is so awesome! We’re glad it was such a success.

Buildbox.com: You’ve had quite a lot of success too with your game dev studio with games like Urna Wars which was ranked #1 in Brazil Top Charts. And your other game, The Adventures of Baby V was developed in partnership with YouTube influencer, Flávia Calina. How did that come about? Any tips for other developers on connecting with influencers?

Edson Junior: In my two influencers partnerships, I did a demo of a game based on their content. After that, I contacted them through their communication channels, and it worked for me. In the process, I’ve had a lot of negative responses from other influencers, but I think persistence is the key to everything. The Adventures of Baby V was my second game with a Youtuber. Of course, after the 450,000 downloads, I got from the game due to Flávia Calina’s popularity, this opened a lot of doors for Ticjoy. Even because of this game, I got a contract with a company here in the USA, the Legends of Learning, where for them, I developed 18 educational games. Pippos Quest was also another game that I mostly got due to the development of As Avenuras da Baby V.

Buildbox.com: How do you approach marketing and app promotion?

Edson Junior: At first, I thought a lot about creating my games and publishing on my own, but today, I see that publishers are the best way. I’m always getting in touch with publishers testing some game prototypes I have developed, and soon we will have news on some ongoing projects.

Buildbox.com: What’s one piece of advice that all developers just starting should follow for success?

Edson Junior: Make your first game and publish. Don’t be worry if it’s good enough. Just do it and post it. Over time the improvement will come naturally and consequently the monetization of your projects.

Buildbox.com: What can we expect to see from you and TicJoy in the future?

Edson Junior: I am currently learning more about Buildbox 3 and planning games to develop with it in the future and also working on the Droid Escape game that we plan to publish next year. Also, we are starting this work with children who after the game jam gained more strength and I believe that together with the Buildbox team we can further expand this project here in Orlando, Florida and who knows in other cities of the United States. Thanks for the interview and all the Buildbox team for supporting the event.

Buildbox.com: That’s great. We can’t wait to check it out. Thanks so much for sharing your game development journey and being part of the Buildbox community!