We’ve just released a new free 3D template called Interstellar Strike in Buildbox. This action-packed template allows you to create a cool space shooter game in 3D complete with built-in logic and visual effects. With Interstellar Strike, players get to become commanders in space, controlling a spacecraft on a mission to save the world! And the best part is it’s totally free. You don’t need to download anything. Just open up Buildbox, and it will be available on the home screen.

Here’s a quick teaser of the Interstellar Strike template in action:

This template features a 3D shooting spacecraft with touch controls to quickly dodge incoming obstacles. With it’s pre-built logic and visual effects, it’s easy for you to create a space combat game where players are blasting away at alien invaders or deadly asteroids. It includes both shooting and explosion effects, sound effects, UI graphics, and a start and end screen. With Interstellar Strike, you can make your players explore the final frontier in an epic space adventure or have them battle it out in an intergalactic space war.

Plus, this template can also be used to make any flying 3D arcade shooter game you want by simply switching out the graphics. All of our templates are mini-games with pre-built functionality that you can customize and build out to create your own unique game. It’s one of the many cool features included in Buildbox. So, you can even swap out the spaceship with a fighter jet plane and the dark background for a blue sky for a WWII style game or any other theme you can imagine.

To access the new 3D template, all you have to do is open up Buildbox, and it’s right there in our template section on the home screen. There’s absolutely no download needed. It’s already inside the software. Just click on Interstellar Strike and start making your dream game. 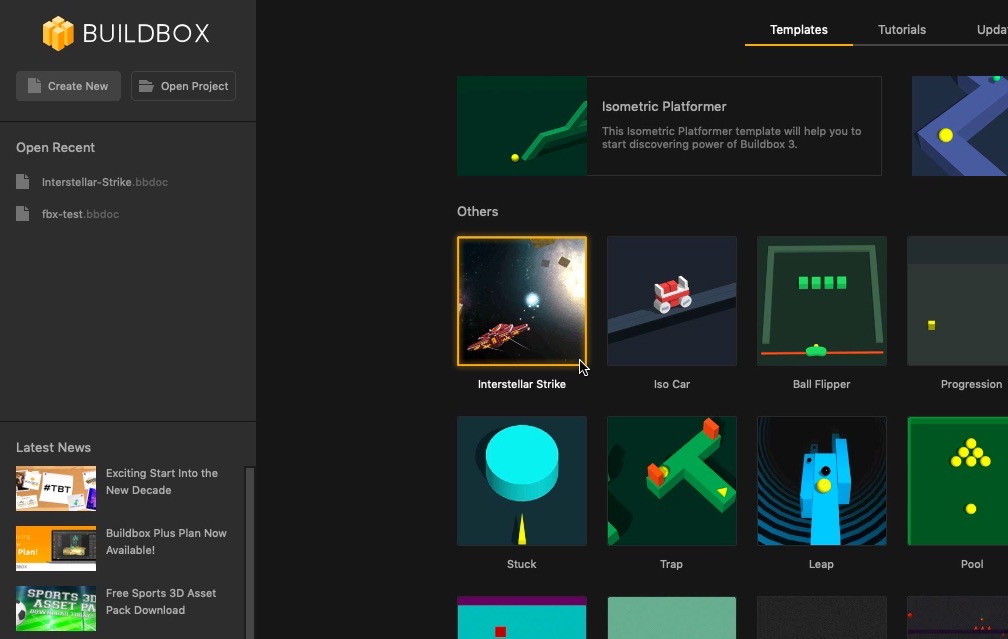 Note: If you not seeing this new template, just close Buildbox, reopen it, and it’ll be right there.

We’ll be adding more free 3D templates with awesome gameplay mechanics like this and asset packs directly to Buildbox very soon. So, keep on developing. We can’t wait to see what you create with our Interstellar Strike 3D template!