Every game developer should have a mobile marketing strategy in place for their app. Creating a solid plan, using app promotion techniques, and having the right pricing structure are all essential for success.

The amount of revenue that your game earns is completely tied to app marketing. It’s a determining factor in the amount of downloads you will get and how well the game will monetize.

So, how much revenue can you expect to make on a game?

As you probably would imagine, this question has many answers. It’s as varied as the very nature of games themselves. Often it’s not uncommon for a top indie game to generate hundreds of thousands of dollars during the first few months in the app store. It’s also not uncommon for a great game to completely flop and generate next to nothing.

In the end, it’s completely related to the visibility your game will get, the viral nature it will withhold and how it will generate revenue.  To really succeed in your mobile marketing efforts you need a solid plan with all of these key points.

It’s important to select the pricing of your game, before diving into monetization. Whether or not your game is going to be paid or free will have a major impact on your mobile marketing approach.

I’ve personally tested this internally many times over the years, and free games generate more revenue (and obviously downloads) every single time. This doesn’t mean you don’t need to make a paid version at all, but if you’re going to decide between the two then always go freemium.

So what exactly is freemium? This simply means a free game that monetizes with in-app purchases somehow in the game.

Freemium games do not have to incorporate complex economies or currency systems, but I do recommend at bare minimum to include a remove ads in-app purchase. Not only can this be a decent source of revenue, it will also provide a better experience for your most hard core users who choose to remove ads so they can enjoy your game more.

Regardless of your in-app purchase options, you will most likely generate a much larger share of revenue on ads. The only exception to this is if you create a massive social game like Candy Crush or Clash of Clans.

Just how much will be made in ads instead of in-app purchases? As always, it’s best to look at real numbers to gather a true perspective of the industry.

Luckily, I was able to get a hold of some valuable mobile marketing data to share, courtesy of Buildbox CEO, Trey Smith. Not only did he agree to share his recorded data for the hit game Phases, but he also provided me with some deeper insights on pricing analysis. 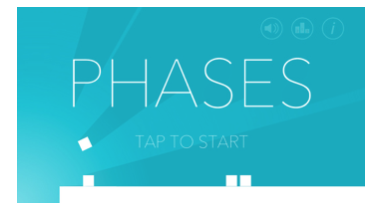 “First off, we decided to initially test a paid version of the game before releasing the free version. Strangely, this was not by choice,” said Smith.

“The real reason we initially launched Phases as a paid game was because it was created with an alpha version of our game creation software, Buildbox.”

“At the time of release we didn’t have ad networks setup in Buildbox, so we decided to test out the waters with the paid version to verify the paid store still wasn’t as effective as the free.”

Due to contract obligations, Smith was not at liberty to discuss the financial monetary numbers of Phases, but he was able to further discuss the breakdown percentages of the various monetization paths that he discovered worked the best.

After testing both pricing options, he realized the free version of the game performed the best download wise.

“The paid version bombed and at this point we changed to free for 4 days (even though we had no monetization in the game) and then removed it from the store because Ketchapp wanted to publish it under their umbrella. However, Phases did really well on its own once we moved it to free. We got over 25,000 downloads in those first 4 days before we pulled it down,” stated Smith.

“After pulling the game from the app store, we had to get it ready for Ketchapp. This meant more than just tweaking gameplay and adding in the changes they requested, it also required us to add in true monetization paths. Luckily, by this time we were gearing up for the release of Buildbox and had many options at our disposal.”

Here’s what he decided to include for monetization:

“There are a few odd things here, starting with the $1.99 price point for remove ads. We typically go with .99 and to be honest, this was an initial mistake on our part, but it ended up monetizing decently so we left it as is.

The second odd part of this setup was displaying the full screen (i.e. interstitial) ad on the Game Over every 7 times. Originally we had this display every 5 times which would be more standard in a game like this. The problem is in Phases you die fairly often, so we decided to change it,” said Smith.

Now let’s see each of these monetization steps broken down: 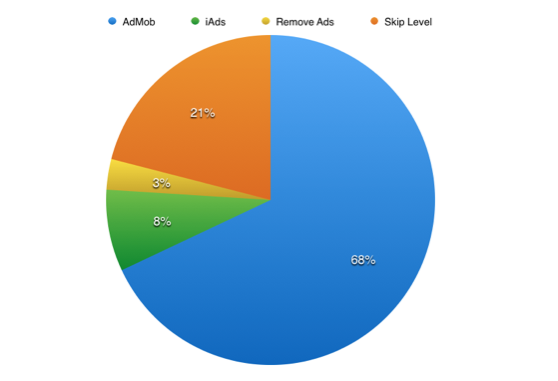 As you can see, AdMob had the lion share of the revenue. That’s because AdMob is where he served the full screen interstitial ads. They typically by far make the most money.

AdMob also shared a majority of the banner placement, though iAds converted very well and brought in an extra 8% revenue.  iAds is no longer an available option, but Admob is still a very popular choice that serves banner ads.

Another hidden benefit of AdMob is the vast reach they hold in smaller countries. With AdMob you rarely have to worry about inventory because they have such a large network. You might find iAds won’t show up in Turkey because they currently don’t have any advertisers in that area, where AdMob is extremely consistent.

According to the data, remove ads was a lowly 3%, even though it was at the $1.99 price point, but this is actually fine.  The goal of remove ads is not to generate revenue, it’s to please your hardcore players who really like your game.

It’s quite surprising, that skip level was responsible for more than 20% of all revenue from Phases.

“This was a shocker, and what’s even better was we threw it in at the last minute. We literally decided to add this option in 2 nights with the night before submitting the final build. We were shocked, but probably shouldn’t have been. The psychology behind it makes sense. People prefer to spend money on things that advance their gameplay,” said Smith.

Now that we’ve examined some excellent data analyzing ad techniques and pricing, it’s time to develop a plan. When it comes to mobile marketing and app promotion having a plan is key. I recommend following what Smith did in Phases. Try using an interstitial on the game over screen in conjunction with a banner.

Remember to design your game around a game field banner. If this is something you want to incorporate, and in some cases (like Phases) it definitely does make sense to leave it out.

Think about your game’s design and interface. Consider the gameplay type as well when you’re deciding which ads and tactics to use.

It’s a great idea to add an in-app purchase to remove ads. Think about what in- app purchases you can add that will increase the gameplay experience. Some popular examples are special power-ups, continue playing options on the game over screen and skipping levels.

Have a strategy in place and know what you want to integrate. Write everything down and test it out as you go. Following these steps will lead you in the right direction for mobile marketing success.