London-based film & TV editor, director, and game developer, Ben Scriven was searching for years to find a way to combine all three of his passions for film, music, and games professionally. With over a decade long career in the entertainment industry, and his own independent production company, Quick March Productions, Ben had managed to do it all, except for making games. Like many aspiring developers, his dream of pursuing game development had fallen by the wayside.

However, that all changed when he discovered Buildbox, a tool that makes it easy for anyone with or without prior coding knowledge to turn their game concepts into reality. Ben got hooked instantly and started making games with Buildbox during his daily train commute into London. He created the action-packed 3D flying arcade shooter, Nite Fighter, using Buildbox 3 and has several incredible upcoming games that will also be released soon. 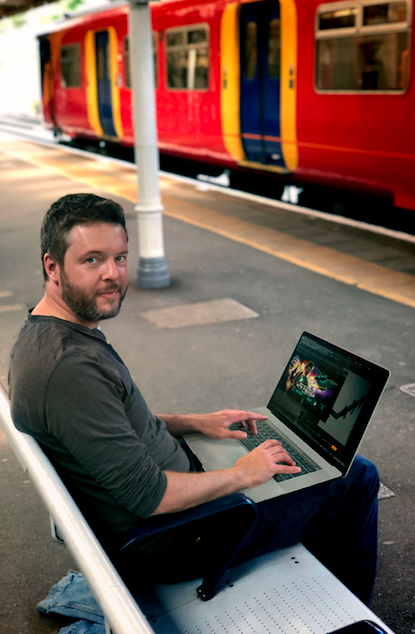 Ben Scriven working on Nite Fighter during his daily train commute in London.

We were honored to have the opportunity to chat with Ben Scriven about his journey into game development, the making of Nite Fighter, and his game design process for adding a cinematic style to mobile games.

Buildbox.com: Can you tell us a little bit about your background in TV and film, and what inspired you to start making games?

Ben Scriven: I’ve been making films and videos for my whole life. Starting out by making silly home movies, my career has led me to work on some seriously high pressured job. But the higher up you go in that industry, the more you get boxed into one job role (no pun intended). I found myself with a skill set spanning editing, music production, motion graphics, sound design, camera work, and only using one or two skills per professional job. When I stumbled upon Buildbox, I saw the opportunity to use my WHOLE skill set… No time pressure, No budget limitations, Just creativity. All of a sudden, I was hooked!

Buildbox.com: What was your first game and the biggest lesson that it taught you as a game dev just starting?

Ben Scriven: “Power Pumpkin and the cursed Forrest.” Don’t search the App Store I never finished it … it taught me not to be afraid of “the code in the node”… when I started, I remember looking down at a sea of random words and not understanding a single line … but you can tinker and try things out… with every error you understand more and before you know it you’re writing your own functions.

Buildbox.com: How did you come across Buildbox, and how has it made game development easier for you?

Ben Scriven: I can’t remember how we met? What I do know is that the timing was impeccable! I needed a creative outlet without any limitations. BB3 came into Beta one week after I subscribed. Its UI was quick to grasp, the potential excited me, and it’s got the depth to really dig into the code of the game.

Buildbox.com: So it must have been fate. Your current game Nite Fighter built with BB3 is a 3D flying arcade shooter with a very cool futuristic vibe. How did you come up with the concept?

Ben Scriven: Old school … I’ve got a bunch of VHS tapes from BLOCKBUSTER on the wall above my desk. I just look up and remember the excitement of Robocop or Critters, when I reach up and actually hold that movie in my hand … you instantly see how those movies were sold. The excitement it promised with the front cover, and my imagination is going. You can’t do that with thumbnails, kids!

Also, it was video covers that inspired me to ‘be the character’ in Nite Fighter. Photoshop is another skill I’ve got, so why not become some an action-movie-cyborg-fighter-pilot-badass. I just think it’s hilarious! 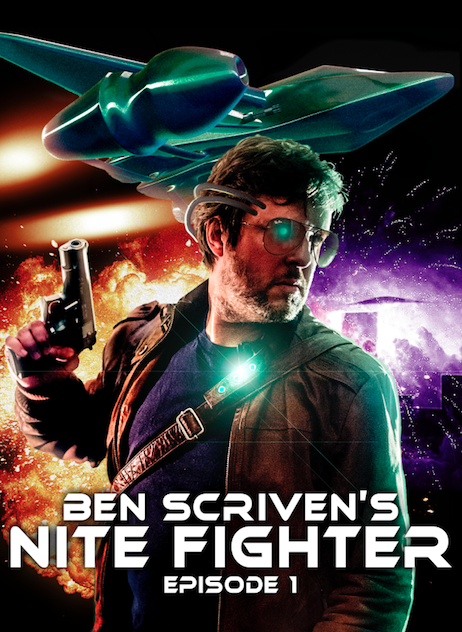 Buildbox.com: Absolutely. It’s one of the many benefits of being a game developer. You get to create your own world. As an experienced director and editor, how do you approach game design? What’s your process?

Ben Scriven: Baby steps … I need to see and hear it incrementally to steer the design… one game mechanic at a time. Actually, I’d say there’s a big comparison between scriptwriting and game dev. You write your first draft, then you understand what you like about the script and begin your second draft (usually ditching half of your first draft along the way). Game dev is the same, but instead of crafting words to represent the visual product, you’re crafting the actual thing! The graphics, the sound … one leads the other … all incrementally.

Buildbox.com: Your upcoming 3D game, Coin Dizzy is an upgrade to 2p coin pushers from the past. How do you brainstorm new unique game ideas?

Ben Scriven: Genuinely, for Coin Dizzy, I think Trey put up a video about “Polish, your game for publishers,” and I thought “What’s polished? What’s shiny? Oh, coins”… then I popped into the snooker template and begun from there … I think it was the snooker template that merged a hockey puck with coin pushing. So, I used the templates.

Buildbox.com: Ah, brainstorming at it’s finest. What’s one piece of advice that you would give to an aspiring game developer, who wants to pursue their dream of making games?

Ben Scriven: No excuses! With BB3, I learned how to make games holding down a full-time job with two kids and bills to pay. I had 2 hours a day to spare on the commuter train, so I used those to get creative. Life is never going to give you the spare time to do it casually, so you have to really, REALLY want it … no excuses.

Buildbox.com: Great advice, so true. Congratulations on the success of Nite Fighter. It’s been featured in the racing category in multiple countries from the UK and Canada to France. So, what’s next for Ben Scriven Games?

Ben Scriven: Make mistakes. Learn more … it’s a total buzz having such a great response to NF, but I know it’s just the beginning. There’s so much to learn about game development. I feel like I’ve only scratched the surface.

Can I just say thanks for all the support from the BB community with my first game. Special thanks to ‘Particles’ for his help with the monetization code and the BB team for being awesome!

Buildbox.com: We’re glad we could help, Ben. Our Buildbox community is the absolute BEST!