We’ve seen the app store go through a lot of changes over the years, but this could be the biggest one.  I really didn’t think there would be a day when I would make a post like this, but I’ve been researching, analyzing, and talking to successful developers… so I’m going to come out and say it.  App Store Optimization (ASO) is dead.

To create any successful business you need two things:  traffic and conversions.  This is true regardless if you’re a SAAS company like Buildbox, a car company like Tesla or if you make mobile games.  In theory, conversions are pretty simple.  You have to have a great product and some system to convert that product into dollars.  With mobile games, this has always been either a premium or freemium business model.  Either charge the money up front, or make money with ads and in app purchases.  Pretty simple, but the traffic side of the business?  Not simple at all.

When I started in 2010, there wasn’t a lot of competition in the app store.  My first game, which was OK, but not amazing, got featured by Apple.  If you got featured on Touch Arcade, you would be in the Top 100 games.  I could email my newsletter list and break the Top 100 of a game category.  Now, that might seem like the “golden years”, but that’s not really true.  While it was easier to rank, it was also a LOT less people on mobile devices.  This year, Apple announced it had sold 1 billion iPhones.  Not only that, including iPad, they have over 1 billion different devices currently active.  That is insane. To put that in perspective, in 2010 when I started there were only 42 million iPhones sold.

So, was it easier to rank in 2010 than 2016?  Yes, but your app was seen by 4% as many people.  Easier launches, much less top side.  This is one reason we’ve generated more revenue in the past 18 months than we have the previous 4 years. The other reason is, the traffic model…

Now let’s discuss traffic, because this is the real lifeblood of any business, and it’s always been sketchy when it comes to apps.  There has often been some sort of short lived “secret” that people would figure out and run as hard as possible until it quit working, and typically this worked around ASO.

Let me give you some examples:

In 2010, people got traffic from Apple features or outside sources like press mentions or email lists.  Again, it was easy to rank then, but less upside because of so few people on mobile devices.

In 2012, people started figuring out App Store Optimization (ASO).  This started earlier, and used to be called App Store SEO, but this is around the time it really took off.  If you’re not familiar, ASO is simply showing up in search results in the app store.

If you can figure out how to rank #1 for “running game”, then your running game is going to get a lot of downloads. Around this time is when people started figuring out tricks. For example, we found out that for a short while Apple was ranking the developer’s company name higher than anything else.  If you made a company called “Best Game, Inc”, then you would rank #1 for the extremely competitive keyword “best game”.  We also found out if you named your app a single name with a period after it, that you would rank #1.  I had a game called “Games.” and another one called “Music.” and ranked #1 for both terms.  To be clear, I didn’t make these up, as a community we were all figuring it out and sharing.  The problem is, it turned into a game of cat and mouse.  None of these tricks work anymore and Apple was constantly trying to shut down the loopholes it created.  They took this very far the past few years making insane changes to the way search works on iPhone. 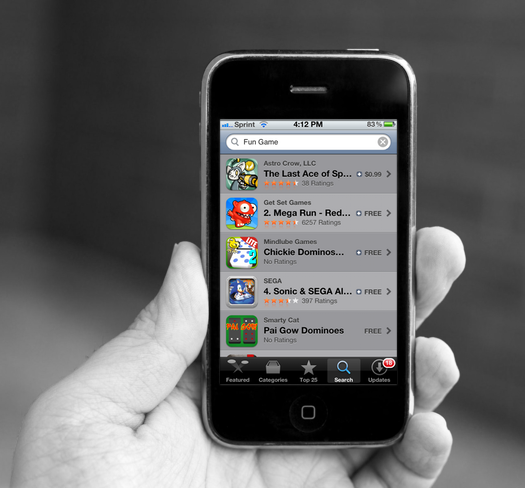 In 2016, Apple continued to make changes until they completely killed App Store Optimization as a business model.  At the time of this writing, I do not personally know a single person who is significantly growing a mobile game business based on ASO.  Even the people who had legacy rankings (i.e. they ranked high for terms in 2012) have slipped down the search results.  This proposed a major problem for developers.  App Store Optimization is how I got my first 10,000,000 downloads, and was the de facto way for indie entrepreneurs to make it in the game market.

Now we’re in 2017.  This is a new era, and as typical in these situations, a few other options have risen up to take place of the falling model.  Yes, App Store Optimization is dead.  It’s a crowded market that now gives the games on top even more leverage, but this does not mean it’s the end for the indie game owner.  In fact, it’s the opposite.  I’m happy to say our business is growing faster than ever and the new model that has replaced ASO for us is here to stay.  It’s actually consistent, which App Store Optimization never was for us.

Before I explain exactly what we’re doing, let me show you every option that is currently working for people right now.

There are a few things that work right now in the mobile market.  Some are harder than others, but I’ll list them all out below, then explain what we’re doing (as well as our most successful customers).

We’ve seen a lot of people doing well by either hiring or partnering with social influencers.  Obviously there are the really big deals done with Kim Kardashian, but this has also worked out on a smaller scale.  We’ve seen people partnering with Vine (RIP) stars, Instagram famous people and more.  It’s a good approach if you have a big following, are great at networking or don’t mind spending some money to promote your game.

This is a tough one to base your business on, but I do know one person, who is not a publisher, who does it.  He literally has built a business solely based on getting featured.  The key here is to first meet someone from the editorial or business development team, and then make sure to add as many new features to your game as possible, and create polished products. Even then though, it’s a bit of a lottery.  If you can somehow make yourself desirable – and have Apple or Google chasing after you – then you have a real strong shot at getting lots of features… but again, easier said than done.

Buying installs is a huge market dominated by big players like MZ, makers of Game of War, and King, makers of Candy Crush. Because this upper echelon of developer has nearly unlimited financial resources, it’s made purchasing traffic extremely expensive for game developers.  I’ve heard you can gain chart position buying Facebook ads for some more obscure non-game app types because they are less competitive, but as a general rule, it’s not easy at all to get profitable buying installs on arcade games.  The one exception I often see is the Piano Tiles which is now owned by the Chinese company, Cheetah Mobile.  I haven’t quite figured out their strategy yet, but they often advertise what seems like a pretty simple game.  Probably worth investigating ;)

The final option you have to get traffic is also the most consistent one.  The only other option that might match it in consistency is partnering with a social influencer, but that largely depends on the outside success of the influencer themselves overtime.

Regardless, probably at no surprise to anyone, getting published is our option of choice to get traffic to our games.  The reason we pick this over other models is because:

Most importantly, it’s been the most consistent way to grow a game business that I have ever seen.  This is how every Buildbox customer who is crushing it has dominated the App Store.  In fact, 70% of the games on our All Star list were published.