Paris, France based indie developer, and founder of Viking Factory, Sebastien Pancrazi has found a new way to make game development fun. As a French Swedish director and producer for commercial films and video games, creating unique visual experiences is nothing new. However, when he discovered Buildbox, his passion for entertaining was immediately taken to a whole new level. With the freedom now to create without the hassles of having to write endless lines of code, he was able to make hit mobile games like White Square and Blue Linea. But it didn’t stop there, as an active member of our Buildbox community he became an avid BB jammer too. He has participated in several of our game jams, turning the process of making a game into a fun event, worth repeating.

In our previous game jam sponsored by Rogue Games, Pancrazi’s entry Dungeon Hoverboard won third place. Although the theme was sports, the bonus challenge was to create one that doesn’t currently exist. He nailed it with Dungeon Hoverboard. Sports continued to be a continuing theme in his most recent release Thug Life Soccer Football, which is an amusing take on the FIFA World Cup.

So, we were thrilled to have the opportunity to chat with Sebastien Pancrazi, founder of Viking Factory about his game development journey, top game jam tips, and the making of Thug Life Soccer Football.

Buildbox.com: Can you share a little bit about your background and how you got started making games?

Sebastien Pancrazi: I’m a French, Swedish director and producer for commercial films and videogames. I do a lot of post-production as well. My previous film work includes producing multiple commercials for Nintendo too. After creating my first game on iOS, Panic Penguin, I started pursuing game development. I plan on releasing a new updated version of Panic Penguin created with Buildbox very soon.

Buildbox.com: As a game developer, what inspires you the most?

Sebastien Pancrazi: What inspires me the most is art in all forms. I often find inspiration in different artwork, comics, films, and other games. I created one of the first web interactive FMV Jack the Knight Adventures on iOS, a fun mix of media and games. It’s in French but free on iOS for the moment. You can check it out at www.lechevalierjack.com.

Buildbox.com: What led you to use Buildbox and how has it helped you with the game development process overall?

Sebastien Pancrazi: First, I worked with a programmer, but it took a long time and a lot of money. Then I saw Trey Smith talking about Buildbox, a no-code software to make games. I jumped on it, and really it has been the only software I have been able to use to make a game since.

My very first game concept, White Square, was created with the original version of Buildbox (BB1). It took me three hours while riding a train from Paris to Marseille. A few days later, I finished it. Cross Color, another game I did was made in about 3-4 hours too. With Buildbox, I can quickly test out new ideas to see what works and is fun.

Buildbox.com: How did you come up with the concept for Thug Life Soccer?

Sebastien Pancrazi: I think we played too much FIFA18, and with the World Cup Football 18 approaching, we wanted to release a little football game just before. The result was a huge football game called Thug Life Soccer Football. The game features a story mode, 12 teams, training, exhibition, and World Cup. Everything is unlockable by winning lottery cards in the game too.

Here’s an exclusive look at the node map and characters for Thug Life Soccer Football: 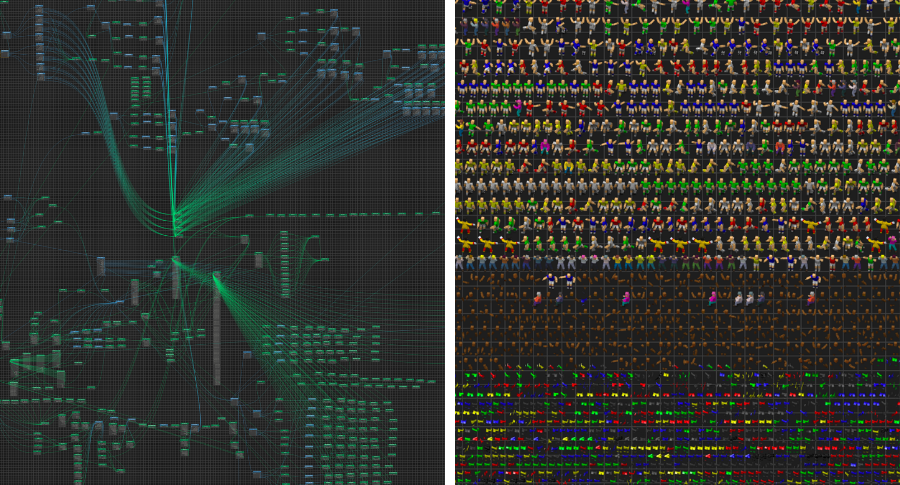 Now Available on iOS and Android!

Buildbox.com: The graphics in Thug Life Soccer Football is incredible, from the field to the stands filled with hardcore soccer fans. What are your favorite tools and resources to use to create game art?

Sebastien Pancrazi: Thanks, 3DSMAX was used to model, animate, and render all the teams and fans used in the game. Klaus Singer from Renderei created them. We had to be careful not to use too much Atlas and use separate layers, so we could mix T-shirts, shorts, hair, skin, and make new teams in the game.  I used Adobe After Effects to create the stadium and all UI and cards.

Buildbox.com: Your entry in our sports-themed game jam sponsored by Rogue Games won third place. As an official Buildbox game jam winner, do you have any tips for new jammers participating in our current jam?

Sebastien Pancrazi: I’m very happy to be part of the history of the Buildbox Game Jam winners. It was my second time participating in the game jam. However, whenever I jam, I try to do a lot of research and then quickly try out different gameplay with Buildbox. The most important tip for jammers is to have fun doing it as well as playing it. If you need help, the Buildbox community is amazing! I was lucky when creating Dungeon Hoverboard, I wasn’t able to throw a tennis ball, the mechanic wasn’t working for me, and Smart Penguins from the BB community gave me the node on his tutorial which helped a lot.

Buildbox.com: What’s one piece of advice that you think every game developer should follow for success?

Sebastien Pancrazi: Follow your instinct. And like Trey says, “find inspiration from what is working, adapt, and do it better.” Just to do it.

Buildbox.com: Any upcoming games to be on the lookout for? What can we expect to see from Viking Factory in the near future?

Sebastien Pancrazi: I’m working on a space adventure. Also, I just updated one of my first games made with BB1: Blue Linea on iOS. In the process of finishing up Dungeon Hoverboard with Rogue Games. And I’m participating in the game jam sponsored by Kwalee, so good luck to all.

Buildbox.com: Wow, you have a lot in the works. We can’t wait to check them all out and see what you enter in the game jam.

You can join in on the fun with Sebastien Pancrazi and others in the Buildbox community participating in our current game jam sponsored by Kwalee. It’s still time to sign up! Just click on the button below: