This week’s game spotlight is Endless Invaders by Adam Rogan. Endless Invaders has been featured in the ‘Best New Games We Love’ section and in multiple collection lists in countries around the globe.

The game has also been featured in the arcade category in the UK, Russia, France, Germany, Canada, Australia, Italy, Spain, Sweden, and several other countries. 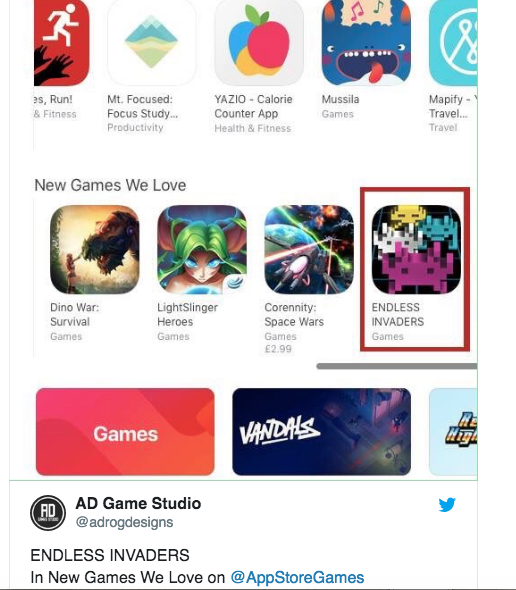 This hit arcade game was created by Adam Rogan, from AD Game Studios in only a couple of days with our software. Much like its name, it’s an endless space invaders game with a few fun surprises.

In this retro arcade space shooter, there’s only one objective, and that’s to try to stay alive. But be warned, survival in this part of the galaxy isn’t going to be easy. Players have to blast their way through an endless invasion of menacing space aliens. Shooting through mobs of enemies, obstacles, and traps all while avoiding incoming shots.

There’s also a bunch of baddies you have to try to defeat or dodge. These space invaders come in a variety of sizes and attack strategies. They shoot, move, and form blockades to throw you off your game. There are also giant boss characters you’ll encounter as well. Players can also collect power-ups and coins to use to unlock more powerful ship upgrades.

If you enjoyed playing classic arcade games from the 80s era like Space Invaders, Pac Man, or Galaga then this game will be a nostalgic trip down memory lane. It combines the beloved gameplay mechanics of the traditional retro games with an updated twist. Endless Invaders features vibrant pixel art graphics, cool laser and explosion effects, glowing beam barriers. And the funky fast-paced techno music in the game takes you out of this world and transports you to another.

It’s a great example of how you can take a concept and use the model and improve technique to make something fresh and unique.

If you’re a fan of the space shooter genre or someone who loves retro arcade games, Endless Invaders is definitely worth checking out. 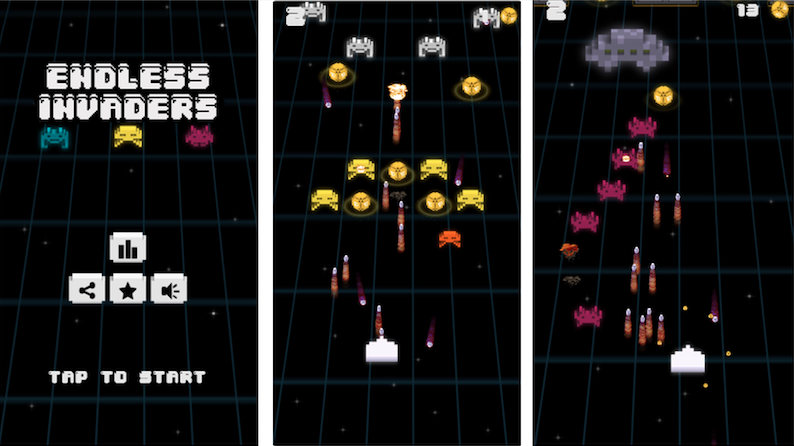 Endless Invaders is now available for download on iOS.

We love to see our customers find success with their games. So, big congratulations to Adam Rogan on his recent success. It’s always incredible when the games that our users create perform well on the charts.

To learn more about the top games built with our game development software, you can check out our All-Stars Showcase.