This week’s Buildbox Game Spotlight is Typographical by Nanovation and Coyowl Games.

Typographical is a remarkably beautiful game that feels like an interactive piece of art. Somewhat similar to Ustwo Games’ Monument Valley players enter a stunning world of mazes. Each letter shaped maze is filled with narrow loops, coins, portals, random obstacles and rotating platforms. Players must carefully guide their character to the nearest exit without colliding into any of the maze walls or obstacles.

Although it sounds simple, Typographical is quite challenging. Precision is key in this puzzle arcade game. Attempting to reach coins in tight areas can be deadly. If you’re one centimeter too close to the edge, it’s Game Over!

Alphabet or Numbers Your Choice

There’s two different playable chapters or game worlds featured in Typographical. The first chapter of mazes are based on the letters A-Z in the Alphabet. The maze representing the letter D for example, features a colorful minimalistic image of a dog with the shape of the D embedded in the image.

The second chapter of mazes are based on the numbers 0-9. The graphics in the game are killer. Very artistic. The game also features 17 unlockable characters ranging from white orbs and stars to effervescent snowflakes.

In Typographical there’s no set time limit on completing each maze. This slow pace style of gameplay combined with the soothing harp inspired music brings an almost Zen-like atmosphere to the game. It’s relaxing, fun and challenging. Nailing all three in a game is often hard.  Yet Typographical manages to do so, quite well.

You can check out Typographical on iOS right HERE.

Typographical was developed by Coyowl and published by Nanovation Labs. Coyowl is an indie game studio based in London, England. Founded in 2016 by Stylianos Kozadinos. The studio’s first game Bouncy Buddy was a huge success. It was featured by Apple 119 times. Buildbox was used to make both Bouncy Buddy and Typographical.

Typographical is the studio’s second game. It’s already been featured by Apple in Korea and has reached the #1 position in the word/puzzle category. 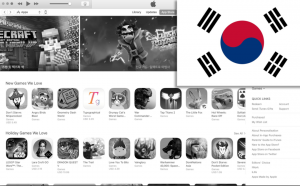 Typographical Featured by Apple in Korea

It only took Kozadinos 1.5 months to create the game while also working a full time 9-5 job. Not only is this a great example of what you can make using Buildbox but how anyone can use it in just their spare time to make ‘Apple Feature’ worthy games.

Buildbox is all about empowering everyday people just like Kozadinos to unleash their creativity and pursue their dream of making games. There’s no coding or programming skills required. You can make your own game regardless of your skill level or experience.

Big congrats to both team Nanovation and Coyowl Games on Typographical’s success!

We look forward to seeing even more phenomenal games and successes in the future.

If you’d like your game to be considered for our weekly Spotlight just post a link to it on our forum in the ‘Game Showcase’ section. You can also Tweet it with the hashtag #buildbox on Twitter. We will definitely check it out!