This week’s game spotlight is Michael Garvey’s Stevedore. It’s a physics-based stacking game with a monochrome art style that’s really cool. Stevedore is Garvey’s first Buildbox game, and it’s already done well on the charts by getting featured in the arcade category in App Stores in countries like China, Japan, United Kingdom, Australia, Canada, India, and the Netherlands.

Almost all of the game’s art was created by Garvey on his iPad using Procreate for the scenes and Concepts for the characters. And of course, he used our no-code software, Buildbox to pull it all together. The result was a physics stacking game like no other.

So, let’s take a closer look at Mike Garvey’s Stevedore!

Stevedore – A Physics Based Stacking Game

In Stevedore, players enter a monochrome docking port as a crew member named Stew set with the task of loading crates onto a ship. This mighty but quite narrow ship is only two crates width wide, leaving only one option: stacking. As your character paces back and forth on the plank situated above the dock, it’s up to you to time each crate drop to land on the ship’s deck without tipping over. 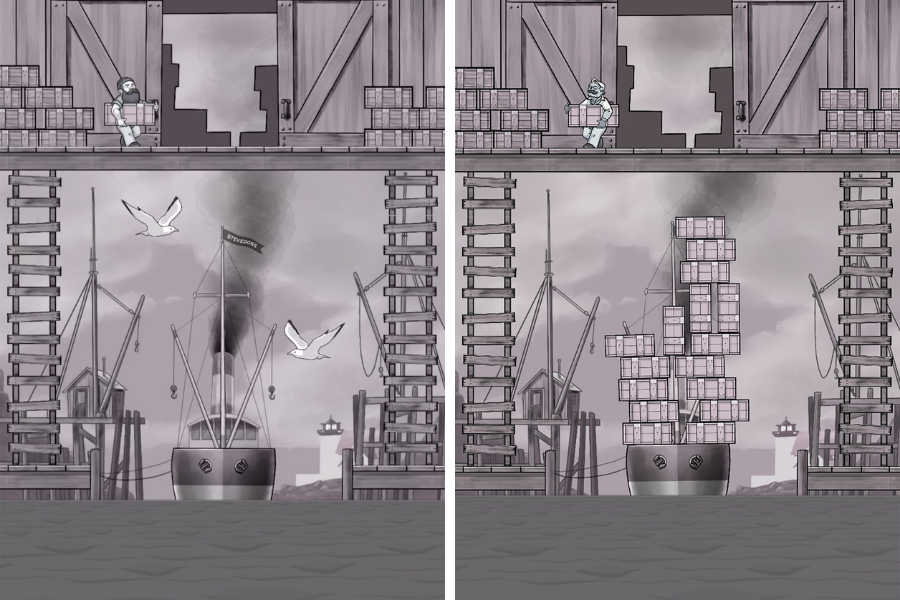 The game’s physics are realistic with the boat swaying along with the water’s current. Dropping the box too close to the edge will make it tip right into the sea. If your crates tumble, slide, or drop into the water, it’s game over. You have to carefully time each tap to lower the container onto the deck.

Each level has a set number of crates you need to stack to clear the stage successfully. The further you get in the game, the more challenging it becomes with a higher number of boxes and rougher waters ahead. Clearing levels earn coins which can be used to unlock new characters. There are six unlock-able characters in total.

The graphics in Stevedore are impressive too. Seagulls fly across the screen, moving waves gently rock the boat, and everything looks and feels rustic. You definitely get transported into the world of docker, also known as a ‘Stevedore.’ The upbeat music composed by Kevin MacLeod also gives this arcade game a fun, playful vibe. You’ll find yourself addicted to stacking and earning coins.

If you enjoy arcade games and are ready for a challenge than Stevedore is a must-play!

Check out some of the stacking action in the gameplay trailer below:

“Thank you Buildbox for making this dream of mine possible!” – Michael Garvey

Congrats to Michael Garvey on the success. We’re so glad that he was able to make his incredible game concept come to life with our software. The possibilities are endless with Buildbox. We hope his success has inspired you to start working on your next big game idea too!

If you’d like to be our next spotlight or be featured in our showcase send us link to your Buildbox game and we’re check it out! We’re constantly on the lookout for new BB games on the horizon. All you have to do is post a tweet that mentions us @buildboxcom and add a link to your game to show us your app. We’re also on the hunt for new games in our official Buildbox forum and Discord channel in the Game Showcase section.