It’s spotlight time, and this week’s pick is Night Rider by Volkan Kutlubay. This cool retro wave style racing game won third place in our Buildbox Cyberpunk Game Jam. It was also ranked Top 100 in the music games category in 11 different countries. Night Rider has been featured in the racing and music collection lists in China, Japan, the UK, France, South Korea, Spain, the Netherlands, and Singapore too.

Night Rider is a visually stunning game set in the 1980s era. In the game, you’re transported into a retro cyberpunk world with flashing neon lights, fast cars, and a booming synth-wave soundtrack. It’s one of the few mobile games that you’ll definitely want to play with the volume on your phone turned up. The objective in this game is simple: drive fast and don’t crash. There are other vehicles on the road that you’ll encounter along with obstacles that you have to avoid at all costs. If you collide, it’s game over.

This futuristic world is also full of surprises. As you cruise through the neon city’s twisting roads hitting speed ramps like there’s no tomorrow, spaceships in the sky will randomly attack. Players have to be quick to dodge the flying lasers. It’s a lot of fun and adds an exciting challenge to a game that’s already fast-paced.

You have the choice of racing in endless or level mode. Both modes are hard to master and addictive. The intuitive one-touch controls, combined with the stunning graphics, make this racer a must-play. There’s also a cool Night Rider T-shirt that you can get to represent.

If you love a great soundtrack and racing against neon lights, you’ll enjoy playing Night Rider! 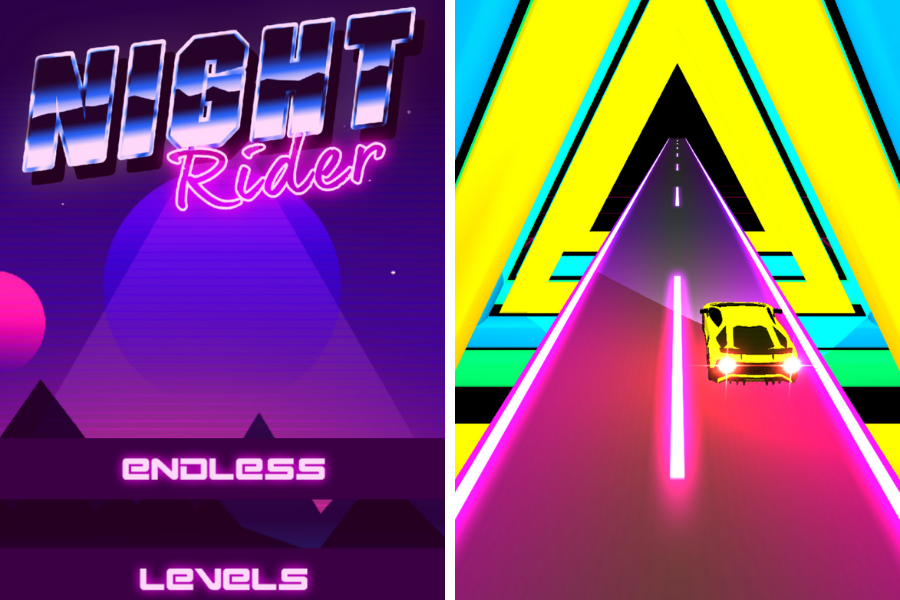 Night Rider is available for download on iOS today!

Big congrats to Volkan Kutlubay on winning our game jam and the successful release of Night Rider!

It’s always great to see our customers succeed! Your games inspire us. We hope our spotlights help to motivate you to get started today on making your own hit game with Buildbox!

If you’d like to be our next spotlight feature, all you have to do is post a tweet that mentions us @buildboxcom and add a link to your game to show us your app. We’re also on the hunt for new games in our official Buildbox forum and Discord channel in the Game Showcase section.