This week we’re shining the BB spotlight on a creator from the Netherlands named Kenney Vleugels. He’s an incredibly talented game designer, and graphic artist who’s been helping developers from all over the world make games. In 2010, he created the popular game asset resource site Kenney.nl providing free 2D and 3D game art for anyone to use. It’s one of the top go-to’s for free game art and offers some fantastic paid asset bundles as well. Kenney also established the Pixeland.io an independent community for developers. Some of our upcoming Buildbox template drops will be featuring Kenney’s assets soon too.

So, we were honored to have the opportunity to chat with Kenney Vleugels about assets, his creative process, and overall thoughts on game design.

Buildbox.com: Can you share a little bit about your background, and how you became a game designer?

Kenney Vleugels: Back when I became interested in game development, there were very few accessible game engines around. Creating games meant a lot of research, tinkering, and frustration. After high school, I made the tough decision not to pursue any form of further education and instead learn more about game development. I managed to get a couple of jobs at Flash gaming portals, which were very popular at the time. After a few years of saving, I started up my own studio and was commissioned to design mobile games. Later on, game asset design became my primary focus.

Buildbox.com: What led you to create Kenney.nl with thousands of free game assets for game developers?

Kenney Vleugels: When creating Flash games, the development times were very short, but there were also a lot of games that didn’t get completed. This resulted in a lot of graphics that would go unused. I learned about the website OpenGameArt.org where people could share their graphics for other developers to use. I decided to upload a character and a few tiles; those became so popular that I quickly started creating graphics to share online. That lead to the creation of my own website and my dedication to creating open game assets all those years later.

Buildbox.com: How did the Pixeland community come about?

Kenney Vleugels: I think game development should be approachable and easy to pick up. I’ve learned that being around like-minded people and being able to get quick feedback or guidance helps make the learning progress easier. That’s why I wanted to start a physical venue where developers can hang out to help others or work on their own projects. The physical site is still under construction (I’ve bought a building in the Netherlands, renovating it myself), but the online component is already up, which has lots of friendly users willing to help anyone. 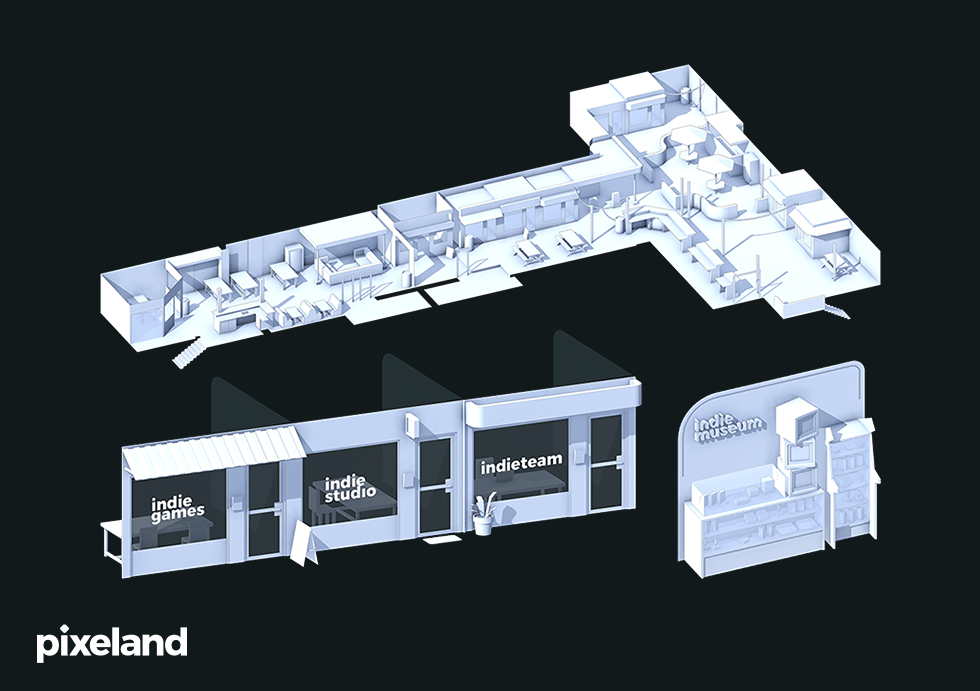 Buildbox.com: As a designer, what inspires you?

Kenney Vleugels: Most of my inspiration comes from pop culture and video games in particular. I try to play most of the popular games that get released but also check out the tiniest indie releases which won’t reach the general audience. That way, I can get a pretty solid grasp on what game assets developers might want to see. If I’m unsure what to create next, I’ll also ask people to send in requests, which never fails to generate numerous ideas.

Buildbox.com: When you’re making game art, what are your favorite graphic design tools to use, and why?

Kenney Vleugels: Personally, I use programs like MS Paint (pixel art), SketchUp (3D modeling), and Adobe Animate (vector art). These aren’t the standard programs that people would suggest. I often get asked why I don’t use more accessible or better programs. I think it’s far more important that you feel comfortable using a certain workflow than it is to have a few extra features here and there. Sure MS Paint doesn’t have layers and isn’t exactly meant for pixel art, but I feel very comfortable using it, and it makes me enjoy creating pixel art.

Buildbox.com: What’s your creative process for coming up with unique art concept and design ideas for games?

Kenney Vleugels: Often ideas come after playing a few different games. Many concepts are combinations of existing ideas. I personally get a lot of inspiration from older games. They are often simpler in design, which makes it easier to expand the concept further.

Buildbox.com: What are some common game design mistakes you see when it comes to choosing game art?

Kenney Vleugels: There are two mistakes I often see made. The first is mixing various styles of game art to a point where it’s obvious that the assets were made by different artists or weren’t meant to fit together. It’s essential that game assets fit together, either by slightly changing the style, textures, or colors or by selecting only those which were made to be used together.

The other is mixing different pixel densities when creating a pixel art game. If you’re creating a game that has pixel art you’d want to make it look like it was released on a retro console. Games like Shovel Knight do this excellently. Those consoles were limited to just a single density, which means technically you can’t scale sprites at all; if you want a character to appear smaller on the screen, you have to draw new sprites. This is a lot of work. Developers often skip this, but it ends up hurting the visual style of the game.

Buildbox.com: We love hosting game jams here at Buildbox. As someone who both organized and participated in multiple jams in the past, do you have any design tips for new jammers?

Kenney Vleugels: Yes! It’s important to make sure your jam entry is attractive to people who are browsing through all games. Having a proper title screen, a nicely designed logo/icon, and a clear game description might seem a bit out of scope for most game jams, but even spending an hour on this will vastly improve the quality, which in turn means more people will check out the game. I’ve written an article about that here.

Buildbox.com: What do you know now from your experience designing game art that you wish you knew starting out?

Kenney Vleugels: That’s a tough question! You never stop learning, and it’s okay to experiment and even to fail. Most of the more unique art I did came from just doodling or trying a new process. When I started out, I would look at what other artists are doing and trying to copy that. The results were good but not unique. It’s best to develop your own style and never stop trying new things.

Buildbox.com: Do you have any sites or books that you regularly read or refer to that you could recommend to other game developers?

Kenney Vleugels: I mostly keep up with the latest news in gaming and game development on social media like Reddit, plus a couple of sites like Gamasutra. There’s a lot of talented people out there that share their knowledge and even data, which can be really useful.

Buildbox.com: What’s your most recent creation we should check out?

Kenney Vleugels: After having created so many game assets, I felt it was time to create a game of my own. I teamed up with my pal Kay Lousberg who’s an absolute car nut. Together we’re creating a game that combines racing with building. Players gather cards around the track, which they can combine to build all sorts of contraptions. Nitroneers should release later this year!

Buildbox.com: That’s so cool. We can’t wait to check it out! Thanks so much for chatting with us.

You can check out Kenney’s assets in action with our Free 3D Platform Template!