The Pocket Gamer Mobile Games Awards is a yearly celebration of the latest and greatest in gaming across 27 mobile gaming categories. With an open voting system and mobile games from major studios to indie favorites as nominees, the gaming community and fans get to have their say and help choose the winners. We’re so proud to have creators from our Buildbox community nominated this year!

VRPlaying Games’ Balance Stuff built with Buildbox is nominated for ‘Best Quick Play Game’ in this year’s Pocket Gamer Awards. It’s a hyper-casual physics-based puzzle game that takes stacking to a whole new level. There’s even a super cute animated roll of tissue that cheers players on as they attempt to stack their way to a new high-score.

Not Chess by Ovidiu Tepes’ Crevasse Studios is nominated for ‘Best Strategy Game.’ This puzzling chess-like game lives up to its name, challenging players with each strategic move. Ovidiu Tepes is also a nominee for ‘Best Mobile Game Developer.’ As a long-time Buildbox creator, he’s released one hit game after the next, from Cessabit: A Stress Relief Game and Vestigium to The Longest Drift.

Vote for Not Chess!

We encourage everyone to show their support and vote. Voting ends this week, and the winners will be revealed on 3/16/21.

But wait – there’s more! Not Chess, Dangle Dash, and Puzzling Peaks EXE were also all featured on Google Play for February game picks. Each month the Play editors at Google Play select their favorite picks to highlight in various categories. It’s a big deal to get featured! Not Chess by Ovidiu Tepes earned the spot as February’s spotlight. We also had two other creator’s games get picked as well. Astro Hound Studio’s Dangle Dash, an insanely fun mobile hockey game, was featured in February’s highlights. AppSir Inc’s Puzzling Peaks EXE was featured in New indie highlights for the latest innovative games! 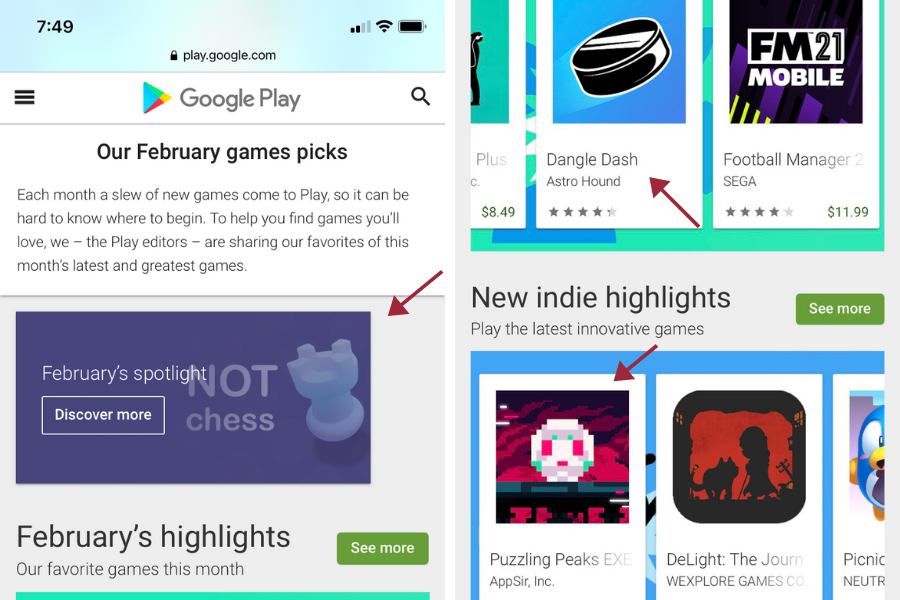 We’re so proud to have our Buildbox community of no-code creators starting this year strong and crushing it in the mobile game scene. Be sure to support our community by checking out these games and cast your vote for the Pocket Gamer Awards today!